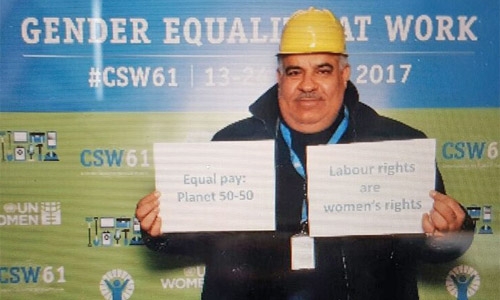 Manama : A top Bahraini human rights organisation has called on the government to implement a law to protect domestic workers from exploitation.

“There are more than 85000 domestic workers in Bahrain and they lack protection. We urge the government to consider a special labour law to solve this problem, giving urgent attention to female house maids. They come to Bahrain from other countries hoping to provide a better life for their families in their home country. However, in many cases they end up working up to 15 hours a day. They are employed on a very low salary and some are even victims of harassment and abuse,” he told DT News.

“We have to consider the fact that they have already sacrificed so much and faced many challenges. Many of these maids are highly qualified and highly educated but have ended up as a domestic worker here. Their ordeal starts with the recruitment agency at their home country. The workers are often lied to about the salary and terms and conditions of the job,” he said adding that every worker has a right to be protected against exploitation.

He also called on Bahrain Free Labour Union Federation to also support the campaign by partnering with the society.

BHRWS is currently representing Bahrain at the CSW61, a UN forum to promote gender equality. The organisation has been discussing the issues related to the lack of family law in Jaafari courts.

“We are highlighting the issues faced by women who are given an unfair treatment at Jaafari courts. While the opposition leaders speak about supposed human rights violations in Bahrain they forget that they have been violating Bahraini women’s rights by blocking the implementation of family law in Jaafari courts. Lack of such a law have left Bahraini women victims of domestic abuse.  At CSW61 we will be campaigning against this.”