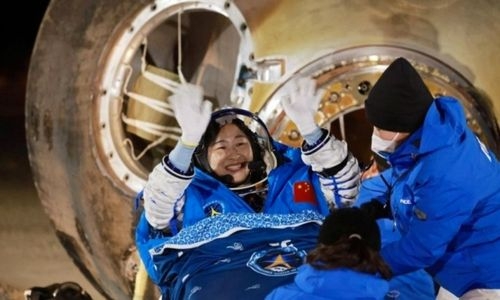 Three Chinese astronauts landed back on earth on Sunday on board the re-entry capsule of the Shenzhou-14 spacecraft, state broadcaster CCTV reported, bringing to an end a six-month mission on China's space station.

The three astronauts - commander Chen Dong and teammates Liu Yang and Cai Xuzhe - who had been overseeing the final, pivotal period of construction at the space station, which was completed in November, all said they were feeling well after landing in audio aired on CCTV.

The capsule landed at the Dongfeng site in north China's Inner Mongolia Autonomous region at 8:09 p.m., with staff from the space agency declaring the entire mission, which began on June 5, a "complete success", CCTV reported.

Staff at the landing site carried out the exhausted-looking crew one by one and by just after 9 p.m. all three had safely exited the capsule, CCTV reported.

A new crew of three fellow Chinese astronauts arrived at the space station aboard the Shenzhou-15 to take over from them on Wednesday, Reuters reports.

Construction of the station began in April last year with the launch of the first and largest of its three modules, Tianhe, being the living quarters of visiting astronauts.