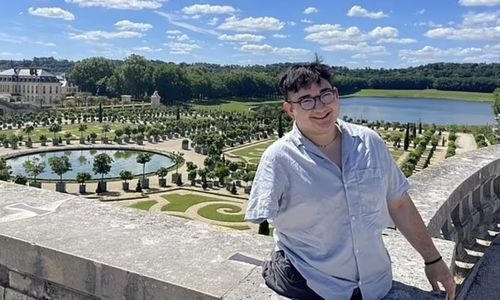 A man with no legs and only one arm says he refuses to let his disability hold him back as he loves to 'prove people wrong'.

Tim Mason, 25, says despite only having one limb, he can still run, cook, dance, walk his dog, and live life independently.

He also ditched his prosthetics at a young age and said they held him back from being himself.

Tim Mason's birth mother was exposed to high amounts of radiation following the Chernobyl nuclear accident in 1986, meaning he was born with only one working limb.

He was then put into an orphanage where it was thought that he would never be adopted.

Virginia Mason, 80, a retired charity CEO said she read about Tim and travelled to Russia to meet him.

The head of the orphanage told her that Tim would not have a good quality of life.

But Virginia Mason said she wanted to be a mother as soon as she met Tim, and raised him as a single mother after losing her partner when Tim was seven years old.

Tim says he wants to prove people wrong and show others that having no arms and only one leg doesn't hold you back.

Tim said: 'People think that disabled people cannot exercise, but we can all do it.

Exercise is for anyone. 'People don't realise that I'm not just sitting in my room as a triple amputee.

I love exercise and it keeps me healthy both physically and mentally 'I wake up every day and fight on.

My independence is the thing I'm most grateful for.' Tim says although Virginia was told by the orphanage that he wouldn't have a good quality of life, she knew he would be fine.

'She knew I would be fine as I looked over and made fish faces at her. She was very happy to find me.'

After Virginia adopted three-year-old Tim, he came to America with her and started speaking English soon after he arrived.

'I went to elementary school and I just skyrocketed,' he said.

'I was really active and always played on the playground.'

When he was younger, Tim said he used prosthetics, a walker and a crutch to help him get around.

But this stopped him from being himself, he said. 'I really didn't like them, they weren't me.

I wanted to be myself without them.' Virginia supported her son's choice he stopped using prosthetics.

Tim said growing up was 'like a rollercoaster'. He initially enjoyed school and made friends, but struggled during his teenage years.

'Middle and high school is when I started to notice the impacts my disa - bilities have on m a k i n g friends.

'I would get asked 'who would even date you?'' Now, with a job and loving family and friends around him, Tim says he can ignore any negative comments.

'There is a lot of doubt in what I can do,' he said. 'It can be discouraging. But I am here and making it through.

I have seen so many positive comments a n d i t means the world t o me. 'People are scared to ask questions.

I get asked questions like why I was born like this and general questions about my condition.

'I am frequently asked how do I go the bathroom which I find hilarious.'

Despite everything, Tim is still convinced that 'life is as normal as he makes it'.

'I really strive to prove people wrong so a lot of my hobbies have come from that,' he said.

He said he loves to walk his dog, dance and exercise. '

People thought I wouldn't be able to take care of a dog but he is my best friend.

'I fully take care of him and take him on three walks a day. The only thing I need help with is driving him to the vet.'