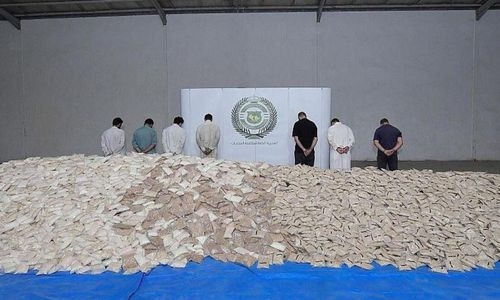 Authorities in Saudi Arabia have thwarted a multi-million dollar drug haul and recovered 46,916,480 amphetamine pills, state news agency SPA reported. The official spokesperson of the General Directorate of Narcotics Control (GDNC), Major Mohammed Al-Nujaidi, stated that security personnel tracked a shipment upon its arrival at the Dry Port in Riyadh and transportation to a warehouse.

In coordination with the Zakat, Tax and Customs Authority, security agents raided the warehouse and arrested eight suspects involved in the smuggling attempt, including six Syrians and two Pakistanis.

The authorities found 46,916,480 amphetamine pills hidden in a flour shipment. The eight suspects were arrested and were referred to the Public Prosecution. The GDNC spokesperson noted that this is the biggest operation of its kind to smuggle this amount of narcotics into the Kingdom of Saudi Arabia.