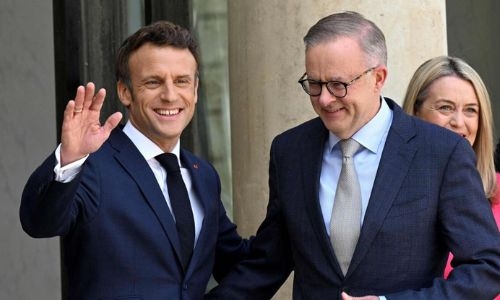 Australian Prime Minister Anthony Albanese welcomed a “new start” in relations with France as he met President Emmanuel Macron in Paris on Friday, after an acrimonious row between the countries over a submarine contract last year.

“My presence here represents a new start for our countries’ relationship,” Albanese said after arriving at the Elysee Palace. “Australia’s relationship with France matters. Trust, respect and honesty matter. This is how I will approach my relations,” he added.

Macron said that the first conversations between the pair since leftwinger Albanese’s election in May “mark a willingness to rebuild a relationship of trust between our two countries, a relationship based on mutual respect”.

After acknowledging “difficult times”, Macron emphasised the two countries’ strategic partnership, their shared war history in Europe and their joint interests in stability in the Pacific region. “We’re going to talk about the future, not the past,” Macron added to reporters, stressing that Albanese was “not responsable for what happened.”

The statements, which followed a warm greeting between the two men and their wives in the courtyard of the presidential palace, underline the sea change in ties since the departure of former Australian premier Scott Morrison.

Macron was left furious last year after Morrison secretly negotiated to buy US-designed submarines and then ditched a landmark contract with France signed in 2016 and worth Aus$50 billion (33 billion euros) at the time.

France broke off diplomatic contacts with Australia and Macron repeatedly the conservative leader of having lied to him during a dinner they shared in Paris in June 2021.

Morrison’s actions were marked by “brutality and cynicism, and I would even be tempted to say of unequivocal incompetence”, outgoing French foreign minister Jean-Yves Le Drian said as he handed over to his successor Catherine Colonna on May 21.

Albanese announced earlier this month that French submarine maker Naval Group had agreed to a “fair and an equitable settlement” of 555 million euros (US$584 million) for Australia ending the decade-old submarine contract.

Canberra has switched to buying nuclear-powered US subs as part of a new security pact with Britain and the United States called AUKUS.After the deal was announced, Macron recalled France’s envoys to both Australia and the United States in a serious and rare diplomatic crisis between leading Western powers.

France considers itself to be a Pacific power, thanks to its overseas territories including New Caledonia and French Polynesia, and shares Australia’s concerns about China’s assertiveness in the region.

“We recognise France is not just a great European power but also an Indo-Pacific and global power. I know that France’s active engagement in the Indo-Pacific will be critical in overcoming the challenges that confront our region,” said Albanese.

Albanese and Macron also stressed their common views on Russia’s invasion of Ukraine, with both countries supplying weapons to Kyiv. “My government strongly condemns Russia’s illegal and totally unjustified invasion of Ukraine,” Albanese said. “I commend President Macron’s leadership in support of Ukraine’s sovereignty and the struggle of the people of Ukraine.”

Macron praised Albanese’s commitment to the fight against climate change, which reverses the stance of his conservative predecessor Morrison. The Australian government recently asked the United Nations to raise the country’s 2030 emissions reduction target.

“The new Australian position — proactive, ambitious — offers us opportunities to advance together,” Macron said. Morrison’s predecessor as premier, Malcolm Turnbull, said the meeting in Paris on Friday was a “big opportunity” to help Paris and Canberra get over a “very bad period” when the French government did not even “pick up the phone”.

Albanese “is not Scott Morrison, so that’s a big advantage”, he told French journalists at an event organised by the Institut Montaigne in Paris this week.