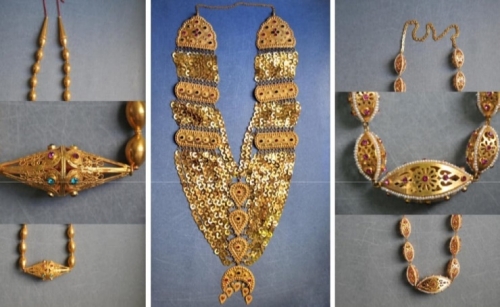 The Bahrain Authority for Culture and Antiquities (BACA) participated in the first International Festival of Gold and Jewelry held in Uzbekistan on May 21-25.

Shouq Al Alawi, Director of Handicrafts Department in BACA, presented a research on embroidery and goldsmithing in Bahrain.

She explained the historical and cultural legacy of the gold industry in the Kingdom and the connection of this industry with the customs and traditions of Bahraini people, in addition to the stages of development of goldsmithing and embroidery of all kinds in Bahrain.

Al Alawi said that the existing of gold in Bahrain dates back to 2050 BC - 1700 BC where the oldest archaeological findings show some gold beads of the State of Dilmun. Ever since, archeological excavation missions found many key pieces in the eras of Dilmun (2500 b.c. – 500 b.c.), Tylos (300 b.c. – 500 a.d.) and the Islamic Period (600 a.d  to 1787 the modern Bahrain). These pieces show great craftsmanship and resemble the wealth of the nation and the significance of gold in the social hierarchy.

“Gold and silver jewelry and items featuring gemstones, ivory, copper, wood, beads have also been unearthed. Such jewelry served several purposed used in rituals or as amulets, ornaments and objets d’art. Specimens include bracelets, anklets, necklaces and earrings,” she said.

Shoug highlighted the trade of pearls, that the people of Dilmun became famous for, noting that the demand was high from India, Sindh, Persia and Mesopotamia.

“An inscription from ancient Assyria, dated to 4000 years ago, refers to “…a parcel of fisheyes from Dilmun”, (fisheyes being the name given to pearls). This export trade was of great importance to Dilmun as shown by the piles of empty oyster shells discovered by archaeologists in shore towns,” she added.

Bahrain has an unrivalled history of adapting the craftsman’s art to the creation of exquisite pieces of jewelry fashioned from raw gold. The history has established the country at the forefront of jewelry design and earned worldwide renown for the goldsmiths of the Island.

In popular heritage, there are some prominent gold pieces could be categorized into head pieces, hair tassels, necklaces and torso pieces, bangles, rings, anklets and costumes ornaments.

The gold pieces can also be categorized to daily wear and occasion jewelry, the ownership of gold was a sign of social status and influence.

Al Alawi pointed out that gold was the main element in the making of traditional costumes (for both men and women) in the form of golden embroidery threads.

She explained that the embroidery is an integral part of the Bahraini thobe (traditional dress), with zeri, naqda,and breisam being some of the most prominent decorative elements in traditional clothing.

Design motifs are often derived from nature and the surrounding environment, including architectural elements and gold metalwork.

The simplicity of silhouettes contrast with elaborate decorations, where personal details and customization communicate a story about a Bahrain before the dominance of western-inspired styles and expanding fashion markets. The strength of historic trade relations with India, East Asia, and the larger MENA region is also reflected through the textiles and fabrics used to make these ornate items of clothing.

She said that the oldest pieces at the Bahrain National Museum belong to Shaikha Aysha bint Mohammed AlKhalifa, the wife of the former ruler of Bahrain Shaikh Isa bin Ali AlKhalifa (1869-1932). As is the case around the world, the density of embroidery and use the golden threads were a sign of social status, the more elaborate the needle work is the more important the person is.