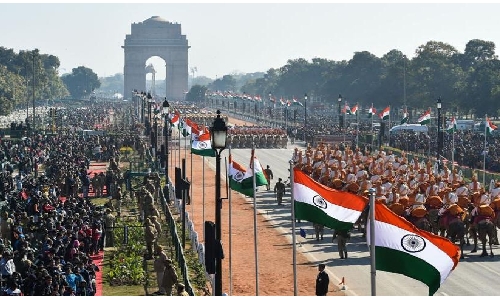 India, one of the most successful republics and biggest democracies in the world, is all set to celebrate its 73rd Republic Day today.

It was on this day in 1930 when the Indian National Congress revealed Purna Swaraj, the declaration of India’s independence from colonial rule.

It was under the leadership of Dr B R Ambedkar, the Constitution of India was drafted and adopted.

On 26 January 1950, India the Constitution of India came into effect, replacing the Government of India Act (1935).

By adopting its Constitution, India became a republic on 26 January.

On that day, Dr Rajendra Prasad started his first term as President of India and the Constituent Assembly became the Parliament of India under the transitional provisions of the new Constitution.

While India was independent on 15 August 1947, it was still governed as per the Government of India Act 1935.

Only with the adoption of the Constitution, did the nation become a republic and completely self-ruled.

The Indian Constitution specifies that India will have a democratic form of government indicating that the people of the country will choose the Government.

It lays down the functions of the government.

Thus the country based on the above-mentioned functions will have three organs of Governance – Executive, Legislature and Judiciary.

The Constitution indicates the relationship between the three organs of governance.

Apart from specifying the powers of each organ of governance, the Indian Constitution has also laid down an effective mechanism of checks and balances between the three organs of governance, to ensure that none of the three become too powerful.

It limits the powers of the government to ensure that the Government doesn’t become arbitrary.

The most common way of limiting the power of Government is by guaranteeing certain fundamental rights and safeguards to the citizens.

The Constitution of India restricts the power of government through the fundamental rights enshrined in it.

Republic Day is celebrated all over India with great fervour.

It is when Indian nationals honour the Constitution of independent India.

All government institutions, schools and colleges host the tri-coloured national flag which is then followed by cultural events.

In New Delhi, the national flag is hoisted by the President of India at India Gate.

The parade is conducted by the Indian President and is arranged by the Ministry of Defence.

Other than displaying its military prowess, the event also promotes India’s diverse culture.

The event also honours the martyrs who have sacrificed their lives for the country.

The Prime Minister of India honours the martyrs by putting a ringlet at the Amar Jawan Jyoti at India Gate.

It’s followed by a 21-gun salute, national flag hoisting, and national anthem. Awards are presented to the brave soldiers in the form of Paramvir Chakra, Ashok Chakra, and Vir Chakra.

Even children and adult citizens who have displayed courage in times of adversity are honoured with awards.

Next are the winners of gallantry awards who salute the President in military jeeps.

This is followed by India’s display of its military power. March-past by the armed forces, police, and National Cadet Corps also take place with the President of India receiving the salute from different regiments.

The parade comes to an end when the Indian Air Force fighter jets fly past Janpath.

The celebration takes place all over the country.

Live webcast of the Republic Day Parade is made accessible every year to millions of people who wish to view the parade over the Internet or TV.

After the event is over, the exclusive footage is made obtainable as ‘video on demand’.

Celebrations, though on a relatively smaller scale, are also held in all state capitals, where the Governor of the state unfurls the flag.

After all the celebrations, the Beating Retreat takes place which officially denotes the end of Republic Day festivities.

All important Government Buildings are beautifully adorned with yellow lights every evening from 26th to 29th.

The Beating Retreat ceremony is conducted on the evening of January 29, the third day after Republic Day.

The drummers also give a solo performance (known as the Drummer’s Call).

At exactly 6 pm, the National Flag is lowered, and the National Anthem is sung, bringing the Republic Day celebrations to a formal end.