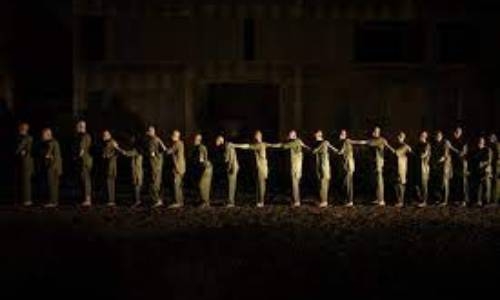 After coming to power in Afghanistan, the Taliban vowed to crack down on widespread drug addiction in the country.

The militant group has been conducting raids in Kabul to find and detain homeless men, often living under bridges, addicted to locally produced heroin and methamphetamine.

The Associated Press captured astonishing photos of one raid from earlier this week, where nearly 150 heroin addicts were rounded up, beaten, and forced into a rehab treatment center.

Homeless heroin users were rounded up by Taliban fighters and taken to the Avicenna Medical Hospital for Drug Treatment on the outskirts of Kabul.

The hospital was once Camp Phoenix, a military base established by the US army in 2003, but is now a drug treatment center that can accommodate 1,000 people.

The Taliban arrested most of the men under a bridge in Kabul's Guzargah district before taking them to the district police station.

The militants burned all of the addicts' possessions in a pile, including drugs, wallets, knives, rings, lighters, a juice box.

Most of the addicts' families don't know where they are, AP said.

"These people are basically being kidnapped for three months and locked up," Mat Southwell, a British technical adviser for drug harm reduction NGOs in Afghanistan who has previously visited Avicenna, told VICE World News.

"They will receive very little medical treatment, and their needs will not be addressed. Once released, they will just start using drugs again."

The Taliban has a history of intolerance towards drug users, saying that it is strictly against their interpretation of Islam.

Some health workers have said they agree with the militant group's harsh methods.

"We are not in a democracy anymore, this is a dictatorship. And the use of force is the only way to treat these people," Dr. Fazalrabi Mayar, working in a treatment facility, told AP.

Afghanistan is one of the world's largest producers of heroin because of its vast poppy fields, and it has also become a significant producer of methamphetamines.

As a result, addiction has raged across the country.

According to people on the ground, there are an estimated 100,00 to 150,000 heroin injectors in Kabul, Vice News reported. Many also smoke and inject methamphetamine.

Around 700 patients are currently at the hospital, according to AP, and many have mental illnesses.

The outlet said the patients float around the halls like ghosts. Although some say they aren't being fed enough, doctors say hunger is part of the withdrawal process, the outlet said.

"It looks like a concentration camp because they shave people's heads and make them wear pyjamas."

The medical opioids used to wean people off heroin, specifically buprenorphine and methadone, have started to run out, and staff in the hospital have not been paid for months, Vice News reported.

The Taliban have said cracking down on the addicts is just the first step.

"This is just the beginning, later we will go after the farmers, and we will punish them according to (Islamic) Sharia law," lead patrol officer Qari Ghafoor told AP