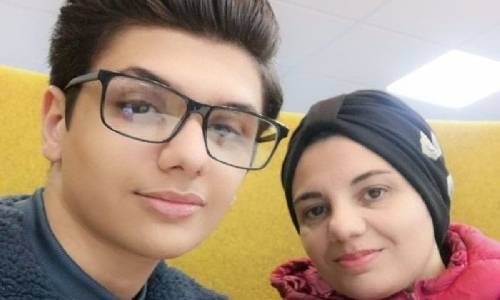 A mother and son who fled the Syrian Civil War in 2015 have both started degrees this week – on the very same course at the very same university.

Manal Rawaeh, 47, and Bilal Batous, 18, are studying biomedical science at Nottingham Trent University, in what is thought to be the only parent and child in the country to effectively be in the same university class.

“Do we sit next to each other in lectures?” says Bilal. “Of course! Her chemistry is very good, so I can copy her work.”
“No, no,” responds Manal. “Bilal’s English is better than mine so, actually, he helps me more than I do him.”

A lot of teenagers might find it a drag being in class with their mother. “Yeah, yes,” laughs Bilal. “At first, I think I need to run from this. But what we have gone through, you realise how important family is; how dependent you are on them.”

Undoubtedly, the pair have had quite some journey to the labs and lecture halls of Nottingham from their previous home in Idlib – a one-thriving city now devestated by fighting which continues even today.

They themselves fled in 2015. Up until that point, the war had felt real but distant. Then a shell dropped from a plane destroyed the apartment block next to their own.

“Terrifying,” remembers Manal, who had worked as a lab technician in a local hospital. “Many dead. Twenty-two people. They had nothing to do with the war but were killed by the government anyway. After that – with children – how can you stay? Four years [the war had been going on] but seeing that…I won’t forget it.”

The family – that’s Manal and Bilal as well as dad Amjad, a postal worker, and two more sons – crossed the border into Turkey where they lived for a year before being moved to the Gedling area of Nottinghamshire in 2016 under the Syrian Resettlement Programme.

None of them could speak English at that point but they all took lessons and grafted hard. Within three years, Bilal had passed his GCSEs. Within another two, he’d nailed a B-tech in science along with A-Levels in Arabic and Sociology.

Manal, meanwhile, was advised that, if she wanted to do lab or hospital work in the UK, she would need a degree from a British university to accompany the one she has from the University of Damascus.

And, so, as timing would have it, they both began applying for degree courses at the same time.

Did they mean to end up studying together? Not exactly. Bilal originally planned to go to Manchester but ultimately decided he wanted to stay at home with mum and dad. Partially because of everything the family had been through - “but also, because this means I get to save some money.”

Will they do that most famous of student activities and socialise together?

“If mum’s down for coming to events, I’m down for that, yeah,” says Bilal. “She’s fun to be around. Very cultured. I think she can mix it with younger people.”

He chose bio-medicine because he had been inspired by Manal back in Idlib. “I used to visit her at the hospital as a kid,” he says. “I’m a nosy person so I’d be asking what everyone was doing. I found it interesting. You know, helping people through science – this is a great thing.”

Exactly how unusual their situation is remains something of an unknown.

Steve Denton, Nottingham Trent University’s chief operating officer, says he's never known anything like it there, although a mother and daughter, Diane and Azra Queen, both graduated in criminology and psychology from Coventry University in 2016.

Either way, for Manal and Bilal, they are excited for the next four years. Will there be competition for who gets the best grades? “No, no,” she says. “He is my son and my friend. We both do the best we can.”

No change in traffic violation procedures since 2015: Director-General of Traffic