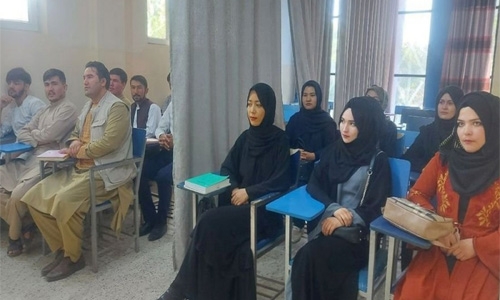 The Ministry of Education of Afghanistan, led by the Taliban has directed all secondary schools to resume from Saturday, however, the directive only mentions the male students, not refer to a return date for girls.

This is contrary to promises made by outfit after assuming power in Kabul last month.

“Hereby, students and teachers of all private and Emirati (governmental) secondary, high schools, and religious schools are asked to return,” Khaama Press quoted the official directive.

The Taliban announced an interim government last week, with a slew of promises, assuring not to repeat the policies of the previous Taliban regime (1996-2001).

However, reports coming from the ground say differently. According to media reports, women are being barred from going to work, and scores of them have demonstrated to demand their rights to employment and education.

Experts and members of the international community have raised concerns about the future of female teachers and students. The newly appointed education minister Shaikh Abdulbaqi Haqqani has said that education activities will take place according to Sharia Law.

A week ago, private universities and other higher education institutions were reopened but the classes were divided by gender. Many people have decried this move, which is set to deprive girls of higher education as major universities in the country cannot afford to provide different classes due to a dearth of resources.

During the Taliban’s last reign, from 1996 to 2001, women were forced to wear a burqa, not go outside without a male guardian. Prayer timings were brutally imposed, men were forced to grow beards. Moral police were installed in every street, to punish violators with harsh punishments like flogging, amputations, public executions.