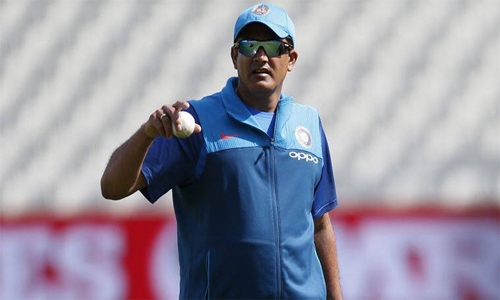 With Ravi Shastri's tenure as India coach ending with the upcoming T20 World Cup in UAE and Oman, talks have started in the BCCI corridor on the road ahead. And as fate would have it, former coach Anil Kumble looks like he could be back in the hot seat.

Speaking to ANI, sources in the know of developments said while it is no secret that Kumble did a good job in his first stint, it will also depend on the former skipper agreeing to come on board a second time before such a move sees the light of the day.

"While the process will once again be a transparent one, it is no secret that Kumble did a good job with the team. What led to the differences four years back doesn't concern anyone now as everyone has moved ahead. While he would definitely be a good option, it needs to be seen whether he himself agrees to come on board a second time. So his nod would also matter. But yes, he is definitely someone who can take the team forward," the source said.

Current head coach Shastri's tenure is set to expire after the upcoming T20 World Cup and it is unlikely that the board will give him an extension. It is also not known whether Shastri himself wants to continue as the head coach or not.

It was the Cricket Advisory Committee - comprising of Sourav Ganguly, Sachin Tendulkar and VVS Laxman - which had appointed Kumble as the coach after Shastri's first tenure as head coach.

Kumble had coached the Indian team with success. But in 2017, it all went downhill despite him having a good record as the coach of the Virat Kohli-led side. There were reports that players expressed their reservations about Kumble's style of coaching and eventually, Kumble stepped down from his post and Shastri took over.

Kumble is currently involved with the Punjab Kings franchise in the Indian Premier League. Earlier this week, Virat Kohli announced that he would step down as India's T20I skipper after the upcoming World Cup to focus more on his batting. However, he will continue to lead in ODIs and Tests.