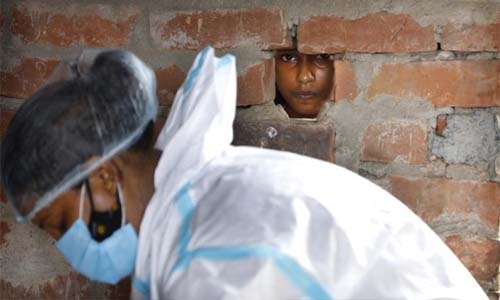 In Jamsoti, a village tucked deep inside India’s most populous state of Uttar Pradesh, the common refrain among the villagers is that the coronavirus spreads only in cities. The deadly infection, they believe, does not exist in villages.

So when a team of health workers recently approached Manju Kol to get vaccinated, she locked up her house, gathered her children and ran to the nearby forest.

The family hid there for hours and returned only when the workers left in the evening.

“I would rather die than take the vaccine,” said Kol.

A deadly surge of coronavirus infections that ripped through India in April and May, killing more than 180,000, has tapered off and new cases have declined. But the relief could be fleeting as a significant amount of the population is still reluctant to get the shots. This has alarmed health experts who say vaccine hesitancy, particularly in India’s vast hinterlands, could put the country’s fragile gains against COVID-19 at risk, The Associated Press (AP) reported.

“Vaccine hesitancy poses a risk to ending the pandemic in India,” said retired virologist and paediatrician Dr T. Jacob John. “The more the virus circulates, the more it can mutate into dangerous new variants that can undermine vaccines.”

Delivering vaccines in the world’s second-most populous country was always going to be challenging. Even though India did relatively well at the beginning of its mammoth vaccination drive, the campaign hit a snag almost immediately due to shortages and a complicated vaccine policy, exacerbating existing inequalities.

Only less than 5% of India’s people are fully immunized. Experts caution that by the end of the year, vaccination rates must go up significantly to protect most Indians from the virus that has so far already killed more than 386,000 people — a figure considered to be a vast undercount.

Starting Monday, every adult in India will be eligible for a shot paid for by the federal government. The new policy, announced last week, ends a complex system of buying and distributing vaccines that overburdened states and led to inequities in how the shots were handed out.

There is still widespread hesitancy fueled by misinformation and mistrust, particularly in rural areas where two-thirds of the country’s nearly 1.4 billion population lives.

Health workers face stiff resistance from people who believe that vaccines cause impotence, serious side effects and could even kill. Some simply say they do not need the shots because they’re immune to the coronavirus.

Rumours about jabs disrupting the menstruation cycle and reducing fertility have also contributed to fear and skewed the data in favour of men. In almost every Indian state, more men are getting vaccinated than women — and that gap is widening further every day.

Quashing such rumours and conspiracy theories is a tough order for many, particularly in India’s tribal-dominated districts that have recorded disproportionately lower vaccine coverage in comparison with other districts, according to official data.

Yogesh Kalkonde, a public health doctor in Gadchiroli, a tribal area in the western state of Maharashtra, said his district was overrun with the belief that the vaccine is more dangerous than the virus.

Some in the area have raised the untrue claim that the shots can cause infertility, Kalkonde said. Others simply question its effectiveness.

“We have to convince people, go door to door, and rely on people who have taken the vaccine to spread the word,” he said. “It’s an extremely slow process.”

There is some pushback. State governments have mounted aggressive awareness campaigns through posters and radio announcements to allay some of the anxiety and confusion. Some local administrations have started giving rides to vaccination centres, especially from remote villages. Volunteers are conducting door-to-door surveys and even small rallies to encourage people to get the jab.