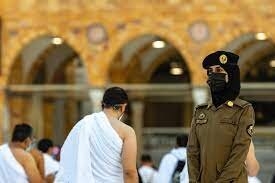 The Saudi Ministry of Interior on Monday published photos of female security officers on duty for the first time at the Grand Mosque, marking recent historic reforms.

The pictures depicted the women guards in security uniforms looking after the safety of worshippers and pilgrims while ensuring that all precautionary measures were being complied with.

Saudi Arabia's recent move to allow women to climb the ranks in its internal security forces is among a series of reforms enacted by Crown Prince Mohammed Bin Salman bin Abdulaziz to advance the rights of women in the country.

Under his Vision 2030 initiative, Saudi women will be allowed to participate in various disciplines and in roles previously limited to men.