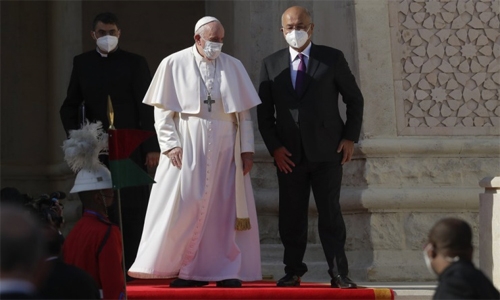 Pope Francis arrived inside the heavily fortified Green Zone, the seat of Iraq’s government, to meet with President Barham Salih and other officials, the Associated Press (AP) reported.

Horsemen carrying both Iraqi and Vatican flags escorted his motorcade inside the Green Zone, which houses key government buildings and foreign embassies.

Salih greeted Francis outside the presidential palace. Both men wore masks as a band played the Vatican and Iraqi national anthems.
Francis, who has been vaccinated along with his entourage, shook hands with several Iraqi officials.

Public health experts have expressed concern about the first-ever papal visit to Iraq, fearing it could accelerate the country’s already worsening coronavirus outbreak. The Vatican said strict health measures would be taken, but many in the crowds greeting Francis were not wearing masks or keeping their distance from others.

Pope Francis rolled down the window of his car to wave at some of the hundreds of people who gathered to greet him as his motorcade rolled through Iraq’s capital.

Crowds waving Iraqi and Vatican flags gathered along Baghdad’s airport road — the scene of regular attacks in the years after the 2003 U.S.-led invasion — to greet the pontiff on the first-ever papal visit to the country.

Iraqi authorities hope to highlight the improved security situation after declaring victory against the Islamic State group in 2017.

The Pope, who arrived earlier on Friday, was on his way to the presidential palace where he is to meet with President Barham Salih and other officials. Francis hopes to deliver a message of peace and hope to Iraq’s Christian community, which has dwindled in recent years of war and unrest.

The Vatican had defended going ahead with the trip despite Iraq’s worsening coronavirus outbreak, saying social distancing and other health measures would be enforced. But many in the airport and along the motorcade route were packed together and not wearing masks.

Pope Francis has arrived in Iraq on a visit to rally the country’s dwindling Christian community after decades of war.

The pontiff’s landmark visit has been months in the making and is the first papal visit to Iraq, one that eluded his predecessors.

He brings a message of peace and coexistence to comfort the country’s deep-rooted Christian minority, many of whom fled the country in the successive conflicts that followed the 2003 U.S.-led invasion of Iraq.

His trip will begin in Baghdad, where he is due to deliver speeches and celebrate Mass in the capital’s churches, and cover the holy city of Najaf, the plains of Ur in Nassiryah province, as well as Mosul and Irbil in the north.

The Alitalia flight, with both Vatican and Iraqi flags, carrying the pope and his delegation landed just before 2 p.m. (1100GMT). A red carpet was rolled out on the tarmac in Baghdad’s international airport.

Hundreds of people gathered along the airport road with hopes of catching a glimpse of the pope’s convoy.

Iraq was estimated to have nearly 1.5 million Christians prior to the 2003 U.S.-led invasion that toppled dictator Saddam Hussein.

Now, church officials estimate only a few hundred thousand, or even fewer, remain with Iraq’s borders.

Men, women and children gathered inside the church early in the morning. Many were not wearing masks and sat close to each other.

One man tapped his feet impatiently, as they waited to be shuttled to the airport in buses.

The papal visit has raised alarm among public health experts, who fear large crowds will inevitably gather to see the pope.

Iraq is confronting a worsening coronavirus outbreak driven by a more infectious strain that first appeared in the U.K.