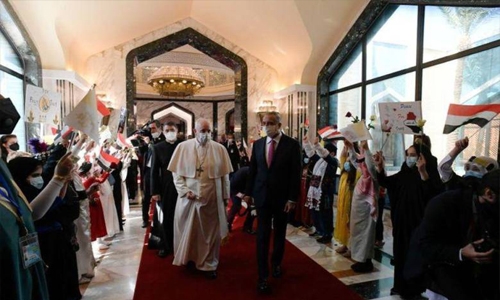 Dr Ahmed el-Tayeb, Grand Imam of Al Azhar and Chairman of the Council of Muslim Elders, has praised the visit of Pope Francis, Head of the Catholic Church, to Iraq describing it as "historic and courageous".

In a tweet, he said, "The historic and courageous visit of my brother Pope Francis to Iraq carries a message of peace, solidarity and support for all the Iraqi people. I pray for his success that this trip will achieve the hoped-for fruits on the path of human brotherhood."

The pontiff’s landmark visit has been months in the making and is the first papal visit to Iraq, one that eluded his predecessors.

He brings a message of peace and coexistence to comfort the country’s deep-rooted Christian minority, many of whom fled the country in the successive conflicts that followed the 2003 US-led invasion of Iraq.

His trip will begin in Baghdad, where he is due to deliver speeches and celebrate Mass in the capital’s churches, and cover the holy city of Najaf, the plains of Ur in Nassiryah province, as well as Mosul and Irbil in the north.