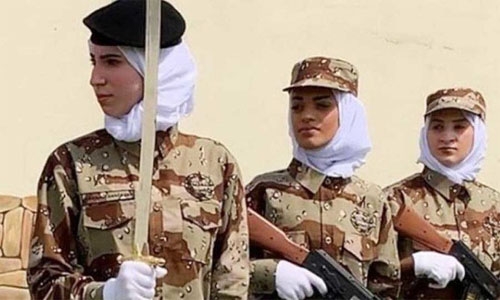 Women can now join Saudi Arabia's armed forces, following a ruling by the Saudi Ministry of Defense that opened the way for both genders to sign up through a unified admission portal starting Sunday.

Military ranks from soldier to sergeant will be available in the Saudi Arabian Army, Royal Saudi Air Defense, Royal Saudi Navy, Royal Saudi Strategic Missile Force, and Armed Forces Medical Services.
All applicants must pass admission procedures according to specified conditions, have a clean record and be medically fit for service. But some additional criteria have been added for female applicants.
Saudi female applicants must be between the age of 21 and 40 years old, have a height of 155 cm or taller, and cannot be a government employee.

Female submissions must also hold an independent national identity card and have at least a high school education. Applicants married to non-Saudi citizens will not be accepted.

The age range for first-time male applicants is between 17 and 40 while their minimum height is 160 cm. There were mixed reactions to the ministry’s new unified recruitment standards.

Operating systems specialist, Halah Al-Ynabawi, said Arab countries allowing women in the military has been a controversial topic over the past 30 years.
“But today, with the vision of King Salman, he has played a big role with the inclusion of women in all fields — governmental and now military,” she told Arab News.
“In my personal opinion, it is very important for women to be in the military, where they can have an active role in our conservative society.” Rahma Al-Khayri, an information technology specialist, shared a different point of view.
“Throughout history, we have not heard of a woman who came to the field and fought,” she said. “We always hear about women healing people, or perhaps monitoring supplies in the administration and in the control units. The man is the one who fights in the field.”