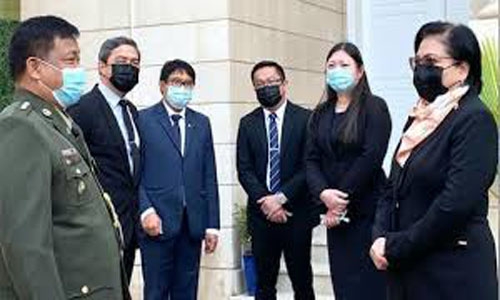 Hjayceelyn M. Quintana, Philippine Ambassador to the UAE, recently led the inaugural rites for the establishment of the Office of the Philippine Defence and Armed Forces Attaché (OPHILDAFA). Among those present at the opening was Defence Attache Col Cesar Fernandez, who assumed his post in December last year.

“The Philippines recognises the UAE as an important partner in the region, playing a strategic role in maintaining peace and stability in the Middle East. The OPHILDAFA in the UAE provides a new channel of communication that further manifests President Rodrigo Duterte’s independent foreign policy and adds a new milestone to the 46-year diplomatic relationship between the Philippines and UAE,” Quintana said.

Located at the Philippine Embassy in Abu Dhabi, this OPHILDAFA is the first in GCC and the second in the Middle East, with the other one situated in Israel.

The establishment of the OPHILDAFA in the UAE was approved by Duterte in February 2019 and accepted by the UAE in August of the same year. In August last year, the embassy met and established linkages with the UAE’s defence conglomerate EDGE Group.

Marking the occasion, Philippine Defence Secretary Delfin Lorenzana sent a message, saying: “The establishment of the OPHILDAFA (on February 21) provides a greater opportunity for the Philippines and the UAE to accomplish more in the areas of defence and military cooperation.

“The UAE is a regional hub for the global defence industry, therefore there is much opportunity for a closer partnership between the Philippines and the UAE.”