Inauguration Day: Biden halts US withdrawal from WHO | THE DAILY TRIBUNE | KINGDOM OF BAHRAIN 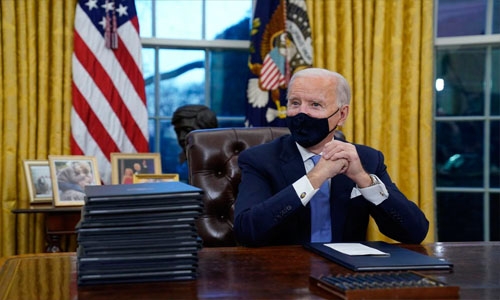 Hours after being sworn in, President Joe Biden on Wednesday (local time) informed United Nations Director-General Antonio Guterres about the US’ decision to re-join the World Health Organisation.

In the letter, he said that the US will be part of WHO’s fight against the coronavirus. “The WHO plays a crucial role in the world’s fight against the Covid-19 pandemic as well as countless other threats to global health and health security. The United States will continue to be a full participant and a global leader in confronting such threats and advancing global health and health security,” he said.

Former President Donald Trump had in July last year pulled out the US from the WHO after criticising the body for covering up the outbreak of Covid-19, which emerged in China in 2019. The US had also backed out of a joint global effort led by the WHO to develop, manufacture and distribute a vaccine to cure coronavirus. The decision would have come into effect from July 6 this year.

Besides retracting from WHO, Biden has also decided to re-join the Paris Agreement, from which Trump had pulled out in November last year.

Hours after taking the office, Biden on Wednesday signed 17 executive orders, memorandums and proclamations including ending the Muslim travel ban.