Will Biden be first US president to fly the new Air Force One? | THE DAILY TRIBUNE | KINGDOM OF BAHRAIN 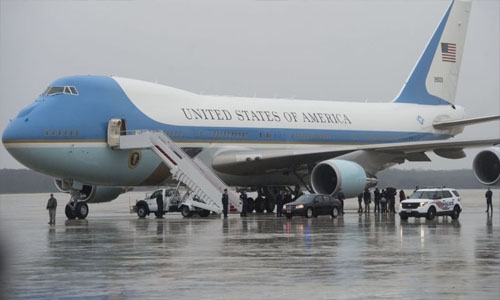 While US President Joe Biden is expected to bring in a raft of changes in his tenure, one of the most recognizable planes in the world that’s been in service since ex-President George H.W. Bush’s reign in the early 1990s, the Boeing 747 Air Force One aircraft, is set to be replaced, and Biden may become the first US president to ride the new Air Force One.

The aircraft that’s been in service for nearly three decades is on it’s way out and will be replaced by a spanking new Boeing 747-8i.

The new VC-25B jet is said to be much more spacious and efficient than its predecessor. The upgrade is expected to cost the White House a whopping $5.3 billion, which includes the cost of the aircraft and the modifications, according to a report in Business Insider.

The last time the plan to upgrade Air Force One was made during President Ronald Reagan's tenure and it was completed by President George H.W. Bush and cost around $660 million.

The new Air Force will reportedly be bought secondhand as a cost-saving measure.

The Air Force One replacement programme had kicked off under President Barack Obama but Trump was not happy with the $4 billion replacement, finding the cost to be exorbitant.

Purchasing less expensive aircraft was also discussed as was the downgrading of presidential fittings, but they were turned doing by the service branch, according to the report.

The new VC-25B jet is also expected to be getting a makeover with the new design featuring more red, white, and blue instead of the timeless blue and white livery. The next-generation General Electric engines will be fitted on the new aircraft. They are said to be more fuel-efficient and have the capacity to carry enough fuel to fly non-stop around the world from Washington. However, but the VC-25B doesn’t have the facility to refuel in the

The timing of the replacement is in line with the move to retire a current lot of ageing Boeing 747 fleet around the world and if things go according to plans, the new Air Force One will enter service in 2024 with Biden becoming the first commander-in-chief to fly aboard the spanking new Air Force One.