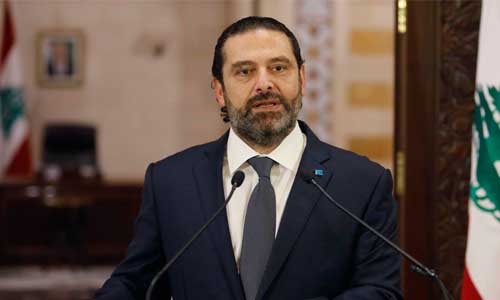 Three-time Lebanese prime minister Saad Hariri was named to the post for a fourth time Thursday and immediately promised a government of technocrats committed to a French-backed reform plan.
Hariri said he would “form a cabinet of non politically aligned experts with the mission of economic, financial and administrative reforms contained in the French initiative roadmap.”
“I will work on forming a government quickly because time is running out and this is the only and last chance facing our country,” he added.
President Michel Aoun named Hariri to form a new cabinet to lift the country out of crisis after most parliamentary blocs backed his nomination.
Hariri, who has previously led three governments in Lebanon, stepped down almost a year ago under pressure from unprecedented protests against the political class.
“The president summoned... Saad Al-Deen Al-Hariri to task him with forming a government,” a spokesman for the presidency said.
Hariri was backed by a majority of 65 lawmakers, while 53 abstained.
Lebanon is grappling with its worst economic crisis in decades and still reeling from a devastating port blast that killed more than 200 people and ravaged large parts of Beirut in August.
Aoun warned Wednesday that the new prime minister, the third in a year, would have to spearhead reforms and battle corruption.
A relatively unknown diplomat, Mustapha Adib, had been nominated in late August following the resignation of his predecessor Hassan Diab’s government in the aftermath of the deadly port blast.
Adib had vowed to form a cabinet of experts, in line with conditions set by French President Emmanuel Macron to help rescue the corruption-ridden country from its worst ever economic crisis.
He faced resistance from some of the main parties however and threw in the towel nearly a month later, leaving Lebanon rudderless to face soaring poverty and the aftermath of its worst peacetime disaster.