U.S. spacecraft swoops onto asteroid to snap up sample | THE DAILY TRIBUNE | KINGDOM OF BAHRAIN 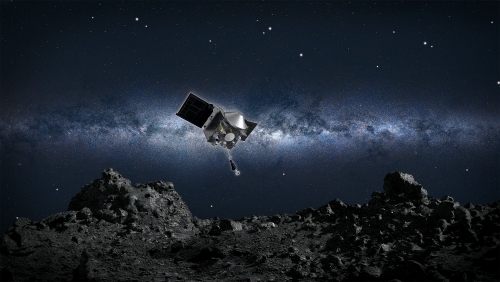 A NASA spacecraft on Tuesday conducted the U.S. space agency’s first sample collection from an asteroid as part of a seven-year-long voyage.

The event, which lasted around four and a half hours, saw Osiris-Rex approaching Bennu at tortoise speed, about 0.3 km/h, and then touching down on the asteroid for five seconds to collect the rubble.

The spacecraft then successfully fired its thrusters to back away from the asteroid surface, NASA said.

Bennu, a black pile of rubble that is about 0.5 kilometers wide and 290 million kilometers from Earth, could come dangerously close to our planet next century, although the chances of impact are very small.

Osiris-Rex, which is the size of a large van, descended steeply towards the asteroid and then navigated ito an area the size of about three parking spaces and surrounded by enormous boulders.

The spacecraft extended a robotic arm called Tagsam, which it used to touch the asteroid for about five seconds, eject pressurized nitrogen to stir up the surface, and suck up a sample of 60 to 2,000 grams before gliding away.

Because of the distance, the NASA team on Earth saw the events with an 18-and-a-half-minute delay.

As the time lag did not allow for live commanding of flight activities, Osiris-Rex performed the whole operation autonomously.