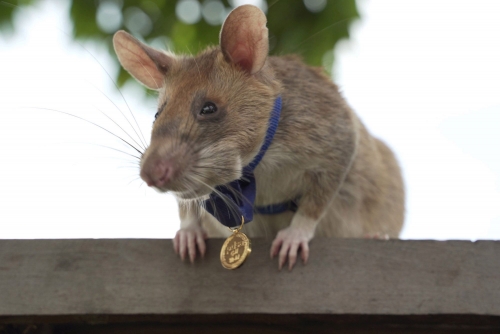 A landmine detection rat in Cambodia has been awarded for saving lives, “lifesaving bravery and devotion to duty”. The giant African pouched rat has been formally recognized for his work and been presented with a miniature gold medal, the animal equivalent of the George Cross.

He was awarded by the British veterinary charity People’s Dispensary for Sick Animals (PDSA) for his work detecting undetonated landmines in Cambodia. Cambodia has spent years slowly clearing the land of explosives, but it’s dangerous work. This is where Magawa, the rat, comes in.

Magawa, who was trained by the Belgian charity APOPO, has sniffed out 39 landmines and 28 items of unexploded ordnance, making him the organization’s most successful “HeroRAT”. “The work of HeroRAT Magawa and APOPO is truly unique and outstanding,” said PDSA director-general Jan McLoughlin.

“HeroRAT Magawa’s work directly saves and changes the lives of men, women, and children who are impacted by these landmines.” Millions of landmines were laid in Cambodia between 1975 and 1998, causing tens of thousands of casualties. Magawa, based in the northern city of Siem Reap, is the first rat to receive a PDSA medal in the 77 years of the awards, joining an illustrious band of brave canines and felines -- and even a pigeon.

The PDSA Gold Medal is the animal equivalent of Britain’s George Cross. The charity also awards the Dickin Medal, for military animals. Sniff and scratch APOPO trained Magawa in his native Tanzania to detect the chemical compound within explosives by rewarding him with tasty treats -- his favorite being bananas and peanuts.

The rats alert de-miners by scratching the earth. He can scurry across an area the size of a tennis court in just 30 minutes, something that would take four days using a conventional metal detector. He is big enough to be attached to a leash as he goes about his business but light enough not to set off mines.

“The PDSA Gold Medal award brings the problem of landmines to global attention,” said Christophe Cox of APOPO. Cox said its team of “HeroRATs” speeded up a landmine detection because of their keen sense of smell and recall. “Unlike metal detectors, the rats ignore scrap metal and only sniff out explosives making them fast and efficient landmine detectors,” Cox said.

“This not only saves lives but returns much-needed safe land back to the communities as quickly and cost-effectively as possible.” APOPO currently has 45 rats finding landmines and 31 detecting tuberculosis in Africa and Asia, according to its website.