Deal to demilitarise Sirte | THE DAILY TRIBUNE | KINGDOM OF BAHRAIN 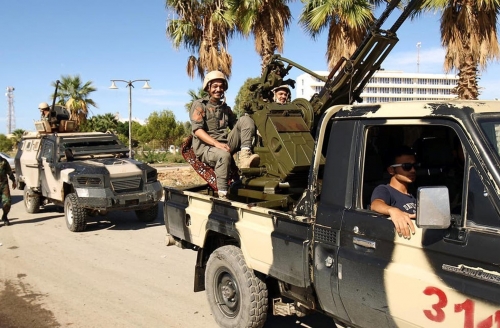 The Tripoli-based Government of National Accord (GNA) and the Libyan National Army under the command of Field Marshal Khalifa Haftar reportedly reached a deal to make Libya’s Sirte a demilitarized zone.  Sirte will also become the temporary headquarters of the new authority, said an AlAyam report quoting Al-Sharq Al-Awsat newspaper.

According to the newspaper, the rivals armies would withdraw from the city, in addition to declaring a permanent truce.  Al- Arabiya sources reported that Libya agrees with Egypt to establish a joint military force that includes the army, police, and special forces to protect Sirte and Al-Jufrah and fully secure the oil sites.

Besides, a Libyan committee said will review all the Turkish agreements signed with the reconciliation government.  The Libyan army affirmed its adherence to canceling military agreements and security cooperation with Turkey and limiting intelligence cooperation that allows the appointment of Turkish military figures inside Libya.