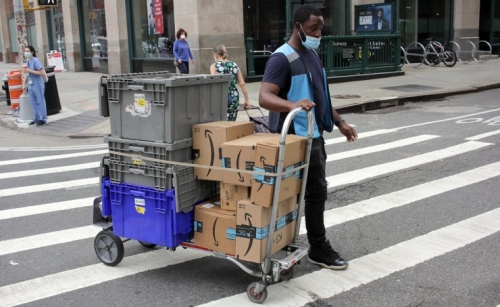 The US online retail giant Amazon announced on Monday that it would add another 100,000 new jobs to support an increase in online shopping amidst the coronavirus pandemic.

"We are opening 100 buildings this month alone across new fulfillment and sortation centers, delivery stations, and other sites," Dave Clark, Senior Vice President of Worldwide Operations at Amazon, said in a statement.

The US unemployment rate spiked to 14.7 percent in April after millions of people lost their jobs due to the coronavirus pandemic.

The jobless rate dropped to 8.4 percent in August after the economy began to recover slowly, but there are still around 11 million fewer jobs in August than there were before the pandemic.

As the job market took a hit, Amazon appeared to be one of the few companies that continued to expand as people avoided in-person shopping.

Monday's announcement will be the fourth large hiring campaign that the online retail giant has initiated this year.

Amazon hired around 175,000 temporary employees during the first months of the pandemic to keep up with unprecedented demand for online shopping. The company announced in May that it decided to keep 70 percent of those new employees permanently.