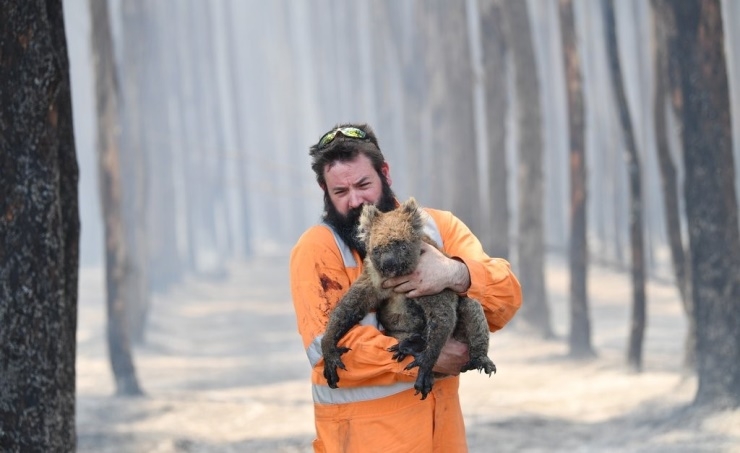 An estimated 830 million tons of carbon dioxide were released into the atmosphere between September and February due to the devastating fires, according to a preliminary estimate by the Department of Industry, Science, Energy and Resources released this month, Deutsche press agency (DPA) reported.

Australia's greenhouse gas emissions are about 540 million tons of carbon dioxide-equivalent per year, according to a policy brief published in October by the Australian National University.

But the fire-affected temperate forests are expected to recover over time, generating a significant carbon sink in the coming years, the government department said in the report published this week.

"Climate change impacts, including droughts or more frequent and more intense fires, can affect the ability of forests to recover after fire," according to the report.

The amount of estimated carbon dioxide released within those six months is more than all countries, except for the top five polluters in the world - China, the United States, India, Russia and Japan.

The bush fire season started early last year in Australia, where more than 3,000 homes were destroyed and 12.5 million hectares of land - or an area the size of more than a third of Germany - burned.

At least 33 people, including half a dozen firefighters, died during the bush fire season, which Prime Minister Scott Morrison called a "Black Summer."

The smoke due to the bush fires caused air quality to plummet in major Australian cities including Sydney and the capital Canberra, where it reached 40 times the hazardous levels.

In the worst-hit and most-populated state of New South Wales, volunteer fire crews responded to more than 11,400 blazes.

The bush fires resulted in massive habitat loss threatening native species. In the case of 113 animal populations including koalas, at least 30 per cent of their habitat was burnt, according to a preliminary study by an expert panel.

The department in its report cited the example of the bush fires that swept through Canberra and neighbouring region in 2003.

"In these areas, by 2019, it is estimated that 96 per cent of initial carbon emissions has been balanced out by carbon sequestration from forest recovery," the report said.

Under the Paris climate agreement, since pollution from such national disturbances is considered beyond human control, it is counted separately under UN greenhouse accounting rules.

"To ensure transparency, all net emissions data – both with and without the natural disturbances provision - will be reported in the government’s annual submission under the Paris Agreement," the report said.

"If the forest does not grow back, then this will be reflected" in the National Greenhouse Accounts, the report said.

Without the use of that accounting loophole, Australia is not on track to meet its 2030 Paris climate target, a 26 to 28 per cent cut below 2005 levels, according to scientists.