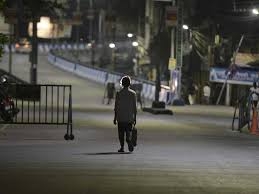 Absent staff and broken supply chains scuppered efforts by some Indian industries to restart Monday, weeks after the government ordered a nationwide shutdown to stop the spread of coronavirus. Although the national lockdown has been extended until May 3, officials said certain key sectors could resume operations under strict conditions in a bid to stop the economy from haemorrhaging further. They include agriculture, some manufacturing and construction industries where shifts can be run and workers isolated, and which employed millions of hard-hit poorer Indians.

The relaxation came as India reported its highest daily increase of infections  1,553 new cases for a total of 17,265, and 543 deaths. A senior railway official in Kolkata told AFP that although a third of staff were told to return Monday, attendance was poor as most employees simply couldn’t get to work.

Several factory operators, meanwhile, said they had difficulty resuming operations because so few staff showed up, and supply chains had also been disrupted. “With no raw material, a ban on transportation, and the non-availability of manpower, I have not been able to operate,” said Ritesh Srivastava, who makes homoeopathic medicines in Lucknow.

Some smaller factories said they couldn’t comply with stringent workplace requirements for returning workers and feared being blamed if staff fell ill. Others said the lack of demand for their goods made it pointless to restart operations. Many out of work, meanwhile, said they were struggling to feed themselves and their families. “We were told that on some sectors will open up, but the reality is different,” said cable TV repairman Rohit Sharma in Noida city, near Delhi. “Now, what can we do? We can earn money only if we are allowed to work.”

State and territory borders remain closed across the country, preventing migrant labourers from travelling. Hundreds of thousands of labourers headed to their home villages when the lockdown was ordered, some walking hundreds of miles and with little money or food.

Those that did not make it have been housed in crowded shelters in the cities, but many want to be allowed to return to their villages. Authorities in Kerala praised for its success in tackling the spread of the virus, yesterday rescinded several measures to ease restrictions -- including opening up restaurants -- after criticism from the central government. Some states and territories, including the national capital New Delhi, chose not to relax their lockdowns, fearing further infections.

Corona deaths in Switzerland 1187, and figures indicate a decline in injuries

Saudi Arabia amending the times to allow roaming during Ramadan