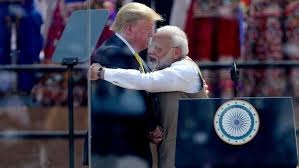 When President Trump arrives on his first official visit to India today, his first stop will be Ahmedabad, the largest city in the western state of Gujarat. It’s the place where Indian freedom leader Mahatma Gandhi built his ashram, a place for prayer and communal living, on a riverbank lined with Indian lilac trees.

In Ahmedabad, a wall at least six feet high in places will block a slum from Trump’s view. Prime Minister Narendra Modi has made grand visits to his home state of Gujarat a signature of his time in power, with the leaders of Japan and China both taking similar trips to Ahmedabad, the state’s largest city.

But the arrival of Trump, residents and officials say, is unprecedented in scale. On Sunday, more than 10,000 police - some mounted on camels - fanned out across the city. At the Sabarmati Ashram, the former home of Mahatma Gandhi, labourers watered lawns and painted walls.

“A general facelift is being done,” said Kartikeya Sarabhai, a trustee of the organisation. “(But) the beauty of the Ashram is in its simplicity.” The modest complex is a possible 15-minute stop today for Trump, whose New York penthouse is decorated in gold in the style of French king Louis XIV.

“We are also considering gifting a set of (Gand h i ’ s ) T h r e e Monkeys, which stress on not seeing, hearing, or speaking evil,” Sarabhai added. Preparations have not been without problems. A 30-foot arch by the VIP entrance to the stadium expected to be used by Trump collapsed on Sunday morning due to high winds, police said, though it was quickly repaired.

Knives Out There is enthusiasm among many in India for Trump’s arrival, but others have been angered at the cost - nearly $12 million for a three-hour visit, according to officials. The two leaders will head Monday night to New Delhi ahead of talks the following day focusing on strategic partnership and trade. India and the U.S. have boosted the number of military exercises they conduct jointly in recent years and Washington increasingly looks toward the world’s largest democracy as a buffer against China’s growing power in the Indo-Pacific region.