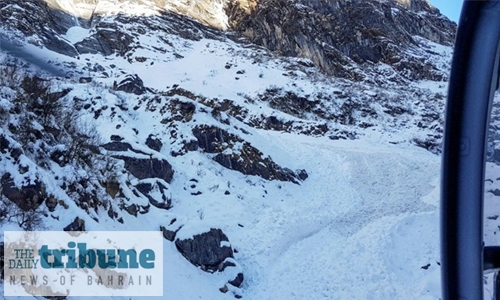 Rescuers intensified an increasingly desperate hunt yesterday for four South Korean trekkers and three Nepalis swept away by an avalanche in the Himalayas as a guide told how he saw people carried off by the snow. Krishna Hari Subedi was helping a Chinese trekker on the trail near the Annapurna base camp when the wall of snow hit on Friday.

“We were descending when an avalanche came rumbling down. Three people were swept down by it in front of my eyes,” Subedij said. “I ducked down and my guest followed, we were safe. If we had moved forward, there was a cliff edge, we would have been swept down.”

Subedi said he saw three people carried away but did not know how many others had been hit in the line of trekkers on the route. “When we began heading down again, we heard a cry for help,” he added. “One of them survived and was walking up. It was nearly 300 metres down.

When he saw us, he fainted... he was taken to a hospital.” The fate of the other two remains uncertain. Families’ anxious wait Soldiers have joined a team using drones and helicopters and digging in deep snow at 3,230 metres (10,600 feet) where the avalanche struck. Small helicopters were being used to drop rescuers at the site, Shanta Bir Lama, president of the Nepal Mountaineering Association, said.

“The narrowness of the area makes the search difficult,” explained Lama. “There is also a lot of snow. But teams today will try to remove the snow and search. Devices are also being used,” he added. A nine-member army team has joined the operation while the South Korean embassy also sent an official to assist.

“The snow from the avalanche is piled four to five metres (13 to 16 feet) deep at the site. No signs of the missing have been reported as of Monday,” an official of the South’s foreign ministry said. Experts say there is a very low chance of survival for those buried in an avalanche for more than two hours.