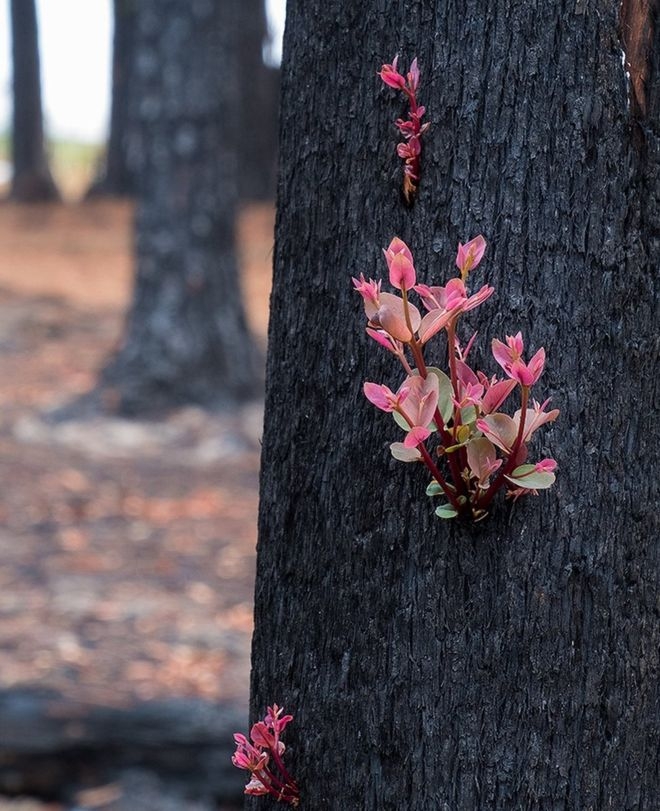 The unprecedented bushfires sweeping parts of Australia have devastated huge areas of the country's natural environment.

At least half a billion animals and countless trees, plants and other living things have been killed since the fires began in September.

But in some recently-burned areas, signs of life are returning, as captured by local photographer Murray Lowe, who went to investigate how fire had affected the bush near his home in Kulnura on Central Coast, New South Wales.

Walking on the grey ash, next to mobile phone masts downed by the fire that ravaged the area in late December, he found green grasses and rose-coloured leaves sprouting through burnt tree trunks.

The photos have been shared thousands of times on social media since Mr Lowe, who's 71, posted them on Monday, as people search for hope amid the devastation.

A keen photographer, Mr Lowe wanted to document the fire-hit areas as a break from his "normal coastal sunrise images".

Driving through Kulnura, he stopped at the edge of Dhurag National Park, in a small residential community which largely survived the fire.

"The ground puffed up ash into the air from each footstep as we walked among the tree trunks in the eerie silence and stillness that only fires of this intensity can produce in aftermath," Mr Lowe, a retired vehicle inspector, explained.

Seeing the plants regrowing so quickly gave him hope, after witnessing what seemed like "total destruction".

"This was the sign of renewal we had been seeking. We were witnessing the rebirth of a forest that Australia is so well-known for," he said.

The 14,850 hectare Dhurag National Park, which remains closed due to fire threat, is home to several species only found in south-west Australia, including the gymea lily.

US storms: At least 11 killed as severe weather hits south