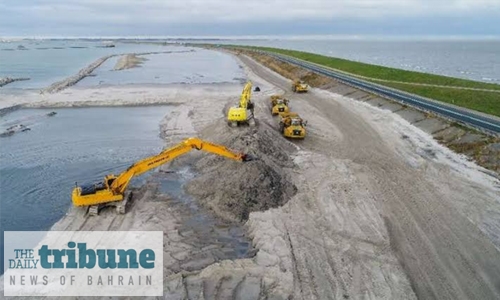 The Netherlands is deploying an unlikely ally as climate change intensifies the low-lying country’s age-old fight against floods: more than 666,000 truckloads of sand to shore up a crucial dike.

While building on sand has traditionally been a byword for wobbly foundations, the Dutch say they have found a new method to turn the substance into a 50-year wall against the water. The Dutch are also planning to export the idea of using sand to prevent floods elsewhere in the world, as global warming and rising waters threaten more countries.

The project comes as UN climate talks this fortnight in Madrid heard that concentrations of planet-warming CO2 in the atmosphere have reached levels not seen in three to five million years, leading to rising sea levels.

The dike in question, called Houtribdijk, needed urgent reinforcement after nearly half a century serving as one of the Netherlands’ most important flood defences. “We had a dilemma: there are no rocks in the Netherlands.

This means having to import them at great cost from countries like Norway,” said Stefan Aarninkhof, hydraulics professor at Delft University of Technology. “Or we had to find another solution and use material that was close at hand. That material was sand.”

‘Finger in a dike’

Engineers said the Houtribdijk project could be compared to the famous story of the Dutch boy who stuck his finger in a dike to prevent a flood. The fictitious character Hans Brinker, created by American writer Mary Mapes Dodge in 1865, supposedly saved a city by plugging a hole in the barrier with his digit.

“But this time we use sand,” one engineer laughed. The 25-kilometre (15-mile) dike is designed to stop waves pushing across the Ijsselmeer, a huge inland bay that has been closed off from the North Sea, into the Markermeer, another inland lake.

Work on the dike started in 1963 as part of the Netherlands’ flood defence system following a catastrophic storm surge in 1953, when flood waters killed some 1,800 people. But scientists in recent years noted the 68-metre-wide dyke – which has a road on top -- no longer met safety standards and had to be reinforced.

The prospect of a dam breach is inconceivable in a country where at least one third of the land lies below sea level.

‘Anywhere in the world’

A massive civil engineering project began in 2017 which uses sand pumped from underneath a thick layer of mud on the bottom of the Markermeer. By mid-2020 more than 10 million cubic metres of sand will have been dumped against the dyke.

After that nature is expected to take care of the rest, with waves and currents dispersing the sand to eventually settle as a barrier against storm surges, the Dutch government’s water management agency said. The mud pumped up to reach the sand will be used to create a new nature reserve the size of 330 football fields.

The agency said in a statement that “sandy reinforcement” of such a dike “is a worldwide first.” “After the reinforcement the levee will be able to withstand a severe storm that, on average occurs every 10,000 years.” The business-minded Dutch are meanwhile planning to sell the idea abroad as the effects of climate change bite.

“We’ve learnt some generic rules in this project about how to work in a lake system building with nature,” said Fokko van der Groot, spokesman for EcoShape, the consortium behind the project.

“The building with nature approach... can be applied anywhere in the world where protection against water is an issue.”