Rajapaksa storms to victory | THE DAILY TRIBUNE | KINGDOM OF BAHRAIN 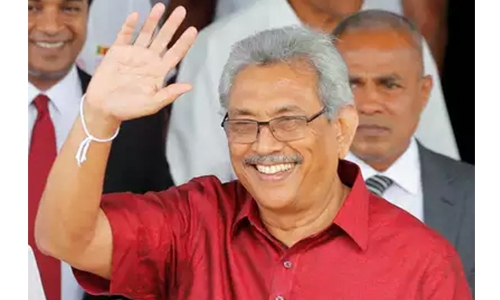 Rajapaksa conducted a nationalist campaign with a promise of security and a vow to crush religious extremism in the Buddhist-majority country following the April 21 suicide bomb attacks blamed on a homegrown jihadi group. Mahinda, with Gotabaya effectively running the security forces, ended a 37-year civil war with Tamil separatists. His decade in power was also marked by alleged rights abuses, murky extra-judicial killings and closer ties with China.

Gotabaya, a retired lieutenant-colonel, 70, nicknamed the “Terminator” by his own family, romped to victory with 51.9 percent of the vote, results from the two-thirds of votes counted so far showed. “I didn’t sleep all night,” said student Devni, 22, one of around 30 people who gathered outside Rajapaksa’s Colombo residence. “I am so excited, he is the president we need.”

Rajapaksa’s main rival, the moderate Sajith Premadasa of the ruling party, trailed on 42.3pc, The 52-year-old conceded the race and congratulated Rajapaksa. On Sunday three cabinet members resigned -- including Finance Minister Mangalar Samaraweera. Rajapaksa due to be sworn in on Monday. Turnout was over 80pc.

Premadasa had strong support in minority Tamil areas but a poor showing in Sri Lanka’s Sinhalese heartland, a core support base where Rajapaksa won some two-thirds of the vote.