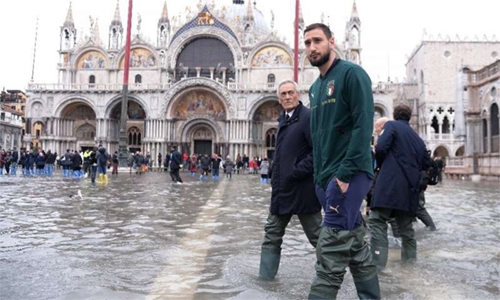 Venice was braced yesterday for an unprecedented third major flooding in less than a week, with sea water due to swamp the already devastated historic city where authorities have declared a state of emergency.

The city forecast “acqua alta”, or high water, of 160 centimetres (over five feet) for just after midday, lower than Tuesday’s 187 centimetres -- the highest level in half a century -- but still dangerous. The renewed threat from exceptionally intense high tides came after a brief respite on Saturday with visitors seen wading through a reopened St Mark’s Square.

The top tourist site had been shut for several hours on Friday as strong storms and winds battered the region, leaving it submerged by sea surges.