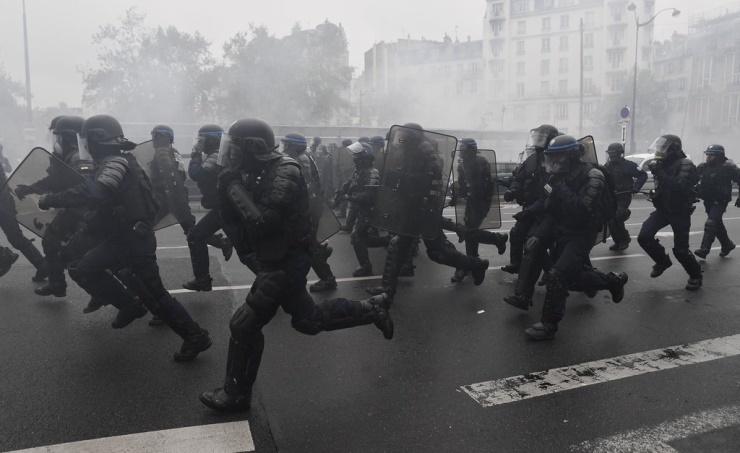 Demonstrators from France's "Yellow Vest" movement gathered in the capital Paris and other cities on Saturday, almost exactly one year after the protest movement first made its mark nationwide.

According to the Interior Ministry, about 28,000 people took part in the protests across France, 4,700 of them in Paris, though the Yellow Vests themselves reported slightly higher numbers, Deutsche press agency (dpa) reported.

Police in Paris said they had carried out checks on more than 1,000 people and had arrested about a dozen people.

Some Yellow Vest protesters, whose name comes from the high-visibility vests that have become the movement's trademark, blocked an important motorway in the north-west of the city. The blockade was quickly removed by police, however, broadcaster BFMTV reported.

Security forces were deployed in large numbers to prevent any rioting, and several underground stations were closed in the capital on Saturday.

On the famous Champs-Elysees boulevard - the scene of some of the worst violence in the last year linked to the protests - demonstrations have been banned over the weekend.

Groups of Yellow Vests assembled instead in southern and northwestern areas of Paris.

Police called for a Yellow Vest demonstration that had been approved for Saturday evening in the south of Paris to be called off due to violent protests that started at the spot before noon.

The majority of these demonstrators did not wear yellow safety vests.

The first nationwide protest by the Yellow Vests took place on November 17, 2018. Some 283,000 protesters blocked roads around the country in protest against a planned fuel tax rise.

The de-centralized movement has since lost steam and has in recent months failed to generate the kind of turnout that shocked the country a year ago.