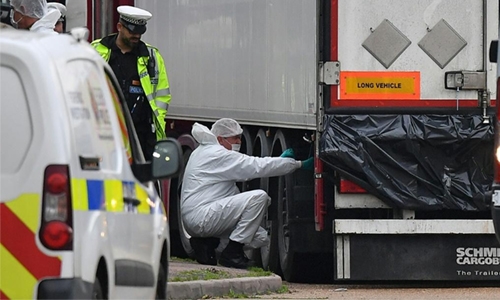 Vietnam has arrested eight more people in connection with the deaths of 39 people found in a truck in Britain who are believed to be Vietnamese, police said yesterday. Eight women and 31 men were found in a refrigerated lorry in an industrial park in Essex, east of London last month, in a case that has shaken Britain and exposed the deadly risks of illegal migration from Vietnam into Europe.

British police initially said the victims were Chinese, but several Vietnamese families came forward to say they feared their relatives were on the truck. None has been officially identified so far. Many of the suspected victims came from just two provinces in central Vietnam, including Nghe An province where eight people have been arrested in connection with the deaths, police said Monday, according to media reports.

“This was a very painful incident, a humanitarian accident,” said Nguyen Huu Cau, director of Nghe An police, confirming the arrests in video comments carried by the staterun Tuoi Tre newspaper. The official Vietnam News Agency also confirmed the arrests, saying the suspects were detained for “organising (and) brokering people to go abroad and stay abroad illegally”. Two other suspects were arrested in Ha Tinh province last week in relation to the incident.

E-scooter riders caught on Singapore footpaths may be jailed