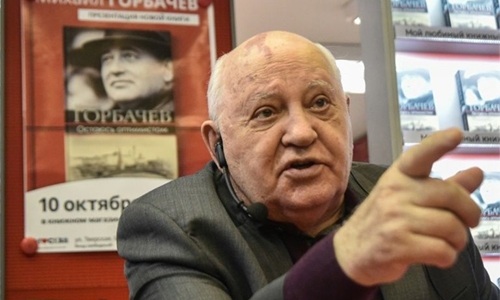 Former Soviet leader Mikhail Gorbachev says the world is in “colossal” danger from nuclear weapons held by global powers amid continued tensions since the end of the Cold War. The last head of the Soviet Union won the 1990 Nobel Peace Prize for negotiating a historic nuclear arms reduction treaty with Ronald Reagan that US President Donald Trump pulled out of this year.

Gorbachev’s decision not to send the Soviet army into East Germany when the Berlin Wall fell 30 years ago was seen as crucial to preserving peace during the Cold War. But he remains a hate figure for many Russians for allowing the Soviet empire to collapse. The 88-year-old told the BBC in Moscow that the world was not safe despite past arms limitation efforts.

“While there are weapons of mass destruction, and especially nuclear ones, it is (in) colossal danger,” he said in an interview aired Monday. “All people have to clearly state -- all people -- that nuclear weapons must be destroyed. This way, we will be saving ourselves and the planet.”

He said the 20th-century rivalry between Moscow and Washington has been replaced by new challenges that put the world in a state of permanent war. “It’s a cooled-down one, but it’s a war,” he said with a laugh. “The atmosphere is all wrong.” Gorbachev has turned into a critic of Russian President Vladimir Putin and his strongarm approach to domestic politics and international affairs.

But Gorbachev refused to be drawn into Britain’s own battles over Brexit and its inability to decide how -- or even if -- it will leave the EU after nearly 50 years. “Go figure it out, you clever English. I won’t be giving you advice. You decide.”