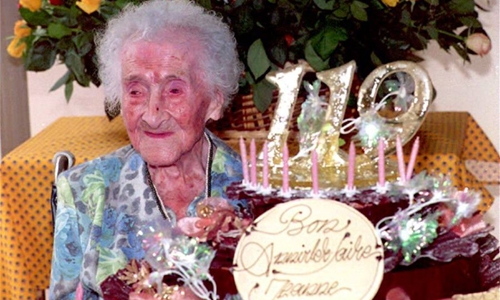 Frenchwoman Jeanne Calment, who died aged 122 two decades ago, should keep the title of the oldest person on record, researchers said yesterday, rejecting claims of fraud. Ageing specialists Jean-Marie Robine and Michel Allard -- who declared her the longest-lived person in the 1990s -- said a review of old and new data confirmed that she “remains the oldest human whose age is well-documented.”

“Recently the claim that families Calment and Billot (her inlaws) organised a conspiracy concerning tax fraud based on identity fraud between mother and daughter gained international media attention,” Robine, Allard and two other researchers wrote in The Journals of Gerontology. “Here, we reference the original components of the validation as well as additional documentation to address various claims of the conspiracy theory and provide evidence for why these claims are based on inaccurate facts,” they wrote.

Calment died in 1997, setting a record that is still unsurpassed. She used to joke that God must have forgotten about her. Last December, Russian researchers claimed in a report that Calment had died in 1934 and that her daughter Yvonne took on her mother’s identity to avoid paying inheritance tax. They said the woman who died in 1997 was Yvonne, not her mother, and at a mere 99 years of age.

The Russian claims were based on biographies, interviews and photos of Jeanne Calment, witness testimony, and public records of the city of Arles in southern France where she lived.

The team also turned to mathematical modelling to counter the argument that her old age was impossible. In every 10 million centenarians, one can reach the age of 123, they said, “a probability that is certainly small, but that is far from making Ms Calment a statistical impossibility.” “All the documents uncovered contradict the Russian thesis,” Robine told AFP.

The INSERM stressed that it could not “support any requests for exhumation” of the body, on which no autopsy was performed after Calment’s death. Born on February 21, Calment became the biggest attraction of the southern French city of Arles since Vincent Van Gogh, who spent a year there in 1888.

She said she had met the artist when he came to her uncle’s store to buy paints, and remembered him as “ugly as sin” and having an “awful character”.