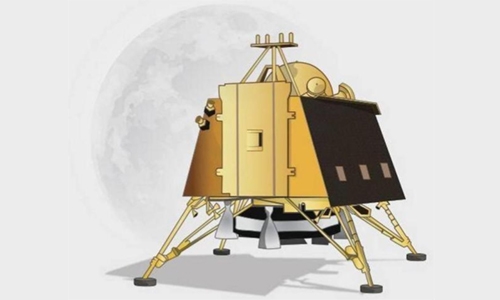 He said the lander rover Pragyan is housed inside it was located by on-board cameras of the Chandrayaan-2 orbiter. Asked if the lander was damaged during the hard-landing, he said, “That we do not know.” Sivan said efforts to establish contact with the lander were continuing. India’s mission to soft-land on the moon suffered a setback during the wee hours on Saturday, with ‘Vikram’ module losing communication with ground stations, just 2.1 km from the lunar surface during its final descent.

Considered as the most complex” stage of the country’s second expedition to the moon, the lander was on a powered decent for a soft-landing when it lost the communication. “Vikram Lander descent was as planned and normal performance was observed up to an altitude of 2.1 km.

Subsequently, communication from the lander to ground stations was lost,” Mr. Sivan had said. “The data is being analysed”, he had added at the Mission Operations Complex at ISRO Telemetry, Tracking and Command Network (ISTRAC) here.

Experts say time is running out and possibility of re-establishing communication looks “less and less probable.” Sivan said on Saturday that the space agency will try to establish link with the lander for 14 days. A senior official associated with the mission said, “Progressively... as time goes by... it’s difficult (to establish link).” However, with “right orientation” it can still generate power and recharge batteries with solar panels, he added. “But it looks less and less probable, progressively,” the official said on the condition of ano- nym - ity.

Another top ISRO offic i a l said “hard-landing” of Vikram on the lunar surface has made the task of linking again with it that much difficult as it may not have the “right orientation,” and may not have landed on its four legs. “Impact shock may have caused damage to the lander,” he said. The successful landing would have made India the fourth country after erstwhile USSR, the US and China to achieve a soft-landing on the moon, also the first to launch a mission to the unexplored south pole of the Moon.

The Chandrayaan-2 orbiter is healthy and safe in the Lunar orbit, an ISRO official said after the lander lost contact with ground stations minutes before the touchdown on Moon’s surface. “The orbiter is healthy, intact, functioning normally and safely in the lunar orbit,” the official told PTI. The mission life of the 2,379- kg orbiter is one year. The orbiter payloads would conduct remote-sensing observations from a 100-km orbit.