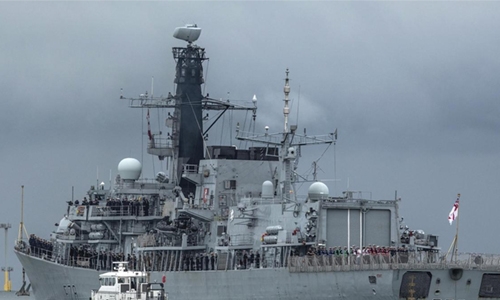 A British Navy warship has set sail to join the USled taskforce to protect merchant ships in the Gulf in response to the threats posed by Iran. The Type-23 frigate  HMS Kent left Portsmouth Naval Base on Monday to take over duties in the Strait of Hormuz from Type 45 defender HMS Duncan. The  Kent  will work alongside  HMS Montrose  to escort British-flagged vessels through the Strait of Hormuz.

Britain announced it would join the US-led coalition after Iran’s Revolutionary Guard Corps seized the British-flagged vessel Stena Impero. “Our focus in the Gulf remains firmly one of de-escalating the current tensions,” the Kent’sCommanding Officer Andy Brown said. “But we are committed to upholding freedom of navigation and reassuring international shipping.” US National Security Adviser John Bolton met British Prime Minister Boris Johnson and senior officials in London on Monday, where they discussed Iran, their trade relationship and the prospect of a post-Brexit agreement.

Mr Bolton, who has a history of hard-line policy towards Iran, was expected to put pressure on British officials to take a tougher stance on Tehran during this week’s trip. Mr Bolton and Mr Johnson discussed the protests in Hong Kong and the UK’s 5G plans, which previously involved Huawei, a company the Trump administration considers a security threat and an arm of the Chinese government. During his visit, Mr Bolton highlighted the strong relationship between US President Donald Trump and Mr Johnson.

“Boris Johnson has been the Prime Minister for what, 18 days? They’ve already had five or six phone calls,” he said. Mr Bolton said that former prime minister Theresa May had refused to join the US-led navy coalition in the Gulf, but Mr Johnson reversed the decision this month.