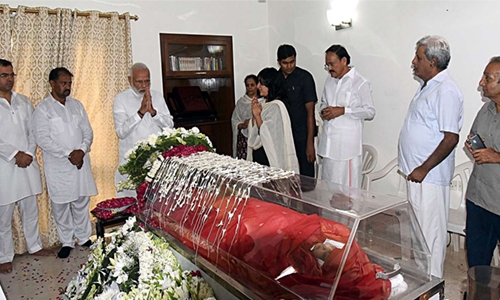 Former External Affairs Minister Sushma Swaraj was cremated at the Lodhi crematorium in New Delhi yesterday with full state honours. She died on Tuesday night at AIIMS after suffering a cardiac attack. Sushma Swaraj was 67. A host of leaders and dignitaries paid tribute to Sushma Swaraj, who was a powerful orator and a Union minister with a difference. She was the most accessible external affairs minister, which changed the face of the ministry during her tenure.

Daughter of a prominent RSS functionary in Haryana, Sushma Swaraj was the BJP’s troubleshooter of all seasons. Swaraj was the most senior female leader of Modi’s Bharatiya Janata Party (BJP). In a political career spanning over 40 years,  Sushma Swaraj had many firsts in her stint with the BJP. She was the youngest Cabinet minister of Haryana at just 25 years of age and also the first woman chief minister of Delhi besides being the first minister to advocate ‘digital diplomacy’, as was evident with her prompt and round-the-clock presence on Twitter to help Indians abroad.

A politician who was respected across party lines, Swaraj was aptly called the crusading “Supermom” of India by the Washington Post for solving the problems of distressed Indians around the world. The former Minister of External Affairs passed away on Tuesday night following a cardiac arrest at an age of 67. From reuniting families to helping citizens recover their passport and travel home from war-torn countries, every request for help, small or big, never bypassed the attention Swaraj, who has blazed a trail for future foreign ministers through her social media heroics.

A former Supreme Court lawyer, Swaraj was born on February 14, 1953, in Ambala Cantt, Haryana. Her father was a Rashtriya Swayamsevak Sangh (RSS) member and thus was brought up in a political atmosphere. She completed her graduation in political science and did LLB course from Panjab University. Her first brush with politics came when she joined the Akhil Bharatiya Vidyarthi Parishad in the 1970s. Sushma Swaraj married Swaraj Kaushal, a criminal lawyer and a senior advocate of the Supreme Court, in 1975. Swaraj Kaushal became the youngest Governor in the country in 1990. During 1990 to 1993, Kaushal served as Governor of Mizoram.

In 1977, Swaraj made her debut in electoral politics as a member of the Janata Party and was elected to the Haryana Assembly. At just 25 years, Swaraj became the youngest Cabinet minister, given charge of Labour and Employment. In her second term, Swaraj held the portfolios of education and Food and Civil Supplies. Swaraj joined the BJP in 1984 and was appointed secretary of the party. Her leadership qualities did not escape the party leadership and she quickly climbed up the ladder to become its general secretary. However, it was also a period when she tasted successive Lok Sabha defeats — in 1980, 1984, 1989. In 1990, however, she was elected to the Rajya Sabha.

Six years later, Swaraj was again back in the Lok Sabha. In 1996, during the 13-day government under the leadership of Atal Behari Vajpayee, she took a revolutionary step of live telecasting of Lok Sabha debates as the Union Cabinet minister for Information and Broadcasting. In 1998 she was re-elected to the Lok Sabha before resigning her seat to become the first woman chief minister of Delhi, a position she held for less than two months. After the BJP bit the dust in the 1998 Delhi Assembly elections, Swaraj decided to return to national-level politics.

The tag of being a giant slayer eluded her by just 55,000 votes when she was pitched against Congress leader Sonia Gandhi in Karnataka in the 1999 elections. However, her fortunes brightened with the return of NDA in 2000 and she was sent to the Rajya Sabha. She was the minister of Information and Broadcasting (September 2000–January 2003) and both Health and Parliamentary Affairs (January 2003–May 2004). In 2004, with the Congress making a thumping comeback, Swaraj had threatened to shave her head if Sonia Gandhi was appointed the prime minister.

However, it was Manmohan Singh who took charge of the top post. After her 2009 Lok Sabha win, Swaraj was made the leader of the opposition. Following BJP’s return in 2014, Swaraj was given the charge of the Foreign Ministry – a role for which she won many plaudits across party lines. Swaraj’s remarkable career graph attests to the significant role she played in Indian politics and the legacy she leaves behind for future women political leaders.