French push to save deal | THE DAILY TRIBUNE | KINGDOM OF BAHRAIN 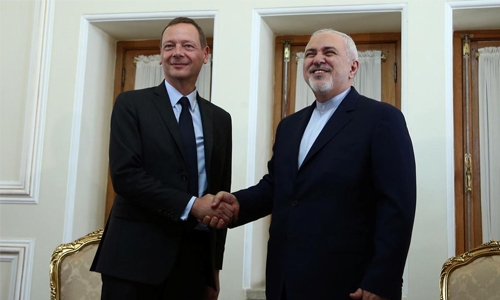 French push to save deal

French President Emmanuel Macron’s top diplomatic advisor yesterday held high-level talks in Tehran aimed at saving the 2015 nuclear deal and easing tensions between Iran and the United States, which called Iranian breaches “nuclear extortion”. The decision to send one of Paris’ top diplomats to the Islamic republic comes as tensions continue to rise between Iran and the United States over Washington’s withdrawal from the nuclear deal, crippling sanctions on the Iranian economy and Tehran’s subsequent reduction of its commitments as outlined by the agreement.

Emmanuel Bonnemet Rear-Admiral Ali Shamkhani, the secretary of Iran’s Supreme National Security Council, and Foreign Minister Mohammad Javad Zarif and his deputy Abbas Araghchi. Mr Bonne’s mission is “to try and open the discussion space to avoid an uncontrolled escalation, or even an accident”, according to French Foreign Minister JeanYves Le Drian. The United States instead urged world powers party to the nuclear deal with Iran not to give in to its demands by providing new economic incentives to get it to backstep its recent escalation of its atomic program.

Jackie Wolcott, the US ambassador to international organisations in Vienna, told a gathering of the International Atomic Energy Agency Wednesday that Iran’s recent moves to enrich uranium beyond the deal’s limits amounted to “nuclear extortion”. She said Iran’s “misbehaviour” should “not be rewarded”. Ms Wolcott reiterated that Washington believes the deal was ineffective, but remains “open to negotiation without preconditions”.

Tehran says it has lost patience with perceived inaction by European countries more than a year after President Donald Trump unilaterally pulled the United States out of the agreement. “Negotiations are never possible under pressure,” Mr Zarif said before the meeting with Mr Bonne, in reference to US sanctions against Iran. Pointing to the US withdrawal from the JCPOA, he added that the Europeans “must solve that problem.” Despite the criticism, Iran has welcomed France’s efforts to salvage the nuclear deal. Iran’s state news agency IRNA reported that Foreign Ministry spokesman Abbas Mousavi “welcomed France’s role in reducing tension and implementing the accord”.

“The French are part of efforts ... to keep the nuclear deal alive,” Mr Mousavi was quoted as saying during the visit by Emmanuel Bonne, Macron’s top diplomatic adviser. But Iran threatened on Monday to restart deactivated centrifuges and ramp up enrichment of uranium to 20 per cent purity in a move away from the nuclear accord. Its moves have been rebuked in capitals across Europe. The three European signatories of the deal, Britain, France and Germany, have all called on Iran to reverse its breaches of the deal.

United did not move fast enough in contract talks: Herrera