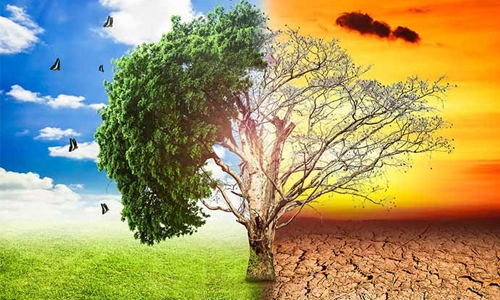 When you walk into your local supermarket and pick up a trolley load of essentials that have been flown in from all over the world – rice from Pakistan, lamb from Australia, oranges from Spain and detergent from France, say – and get it all packed in plastic bags to take home, what did you just do?

In completing your weekly grocery run, you increased your carbon footprint and also, by using plastic, you contributed to global warming.

No country is immune to the effects of climate change, including the Arab world.

In fact, the region’s unique geological and ecological features puts it at a high risk of water scarcity, food insecurity, drought, heat waves, disease and many other significant issues.

What makes this a thorny issue is that young people who can effect major change in managing climate change, seem una - ware of their potential as change-makers.

Young people, as inheritors of this planet, are crucial stakeholders in humanity’s response to the climate crisis.

Climate change cannot be dealt without a high level of youth participation in the Middle East and North Africa (MENA) region or anywhere else.

Sadly, we have not seen the emer - gence of any Greta Thunberg-like environmental activist in the region.

Long-running social issues and conflicts in the Middle East have pushed climate change down the agenda of both public opinion and news outlets in most Arab countries.

All that changed recently when the GCC countries led the new initiative to address this critical issue at a Middle East Green Initiative Summit, which was held on the 25th October.

For example, Bahrain and Saudi Arabia have announced a self-commitment to reach net zero carbon emissions by 2060 and increase the green cover.

Bahrain’s Crown Prince and PM, HRH Prince Salman bin Hamad Al Khalifa has emphasised the importance of knowledge sharing between countries to develop CCUS technology, reduce carbon emissions, and increase energy efficiency, stating that we all have a collective responsibility to achieve climate security and secure a sustainable future.

His Royal Highness also highlighted the important role of agricultural nurseries in realizing the MGI Summit’s afforestation goals and committed Bahrain to supporting these efforts.

Climate change in the Arab world has traditionally been covered as foreign news with a focus on international climate change negotiations — and with limited relevance for a regional readership.

Batelco encourages healthy lifestyle with a new Season on track