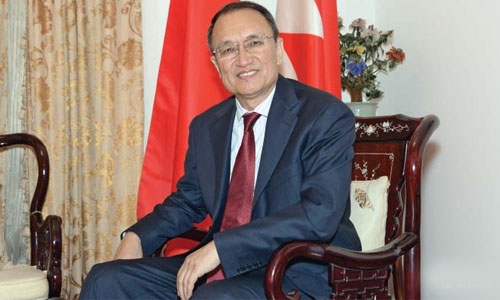 On 1 October, we will celebrate the 72nd Anniversary of the foundinrg of the People’s Republic of China. Over the past 72 years, under the leadership of the Communist Party of China, China has grown from nothing, from weak to strong. Its economic level and overall national strength have developed rapidly, and its people’s living s t a n d a rd s h ave i m p rove d significantly, and it has played an increasingly important role in international affairs. China has become the world’s second largest economy, the largest trader in goods, and the largest foreign investment absorbing country, and its contribution to world economy growth has ranked first among all countries for 15 consecutive years.

In 2021, the Communist Party of China celebrates its centennial birthday. General Secretary Xi Jinping solemnly declared at the celebration of the 100th anniversary of the founding of the Communist Party of China that China has achieved its first centenary goal, building a moderately prosperous society, and historically solved the problem of absolute poverty. This historic achievement not only completely changed the face of China, but also made outstanding contributions to the development of the whole world and mankind.

In 2021, China’s economy will continue to maintain its growth momentum, injecting a booster for the global fight against the epidemic and economic recovery. In the first half of this year, China’s GDP reached approximately 8.22 trillion US dollars, a year-on-year increase of 12.7%. In the first eight months, China’s total import and export value reached 3.83 trillion US dollars, a year-on-year increase of 34.2%, which is a record high. Since the beginning of this year, China has provided COVID-19 vaccine assistance to 105 countries and 4 international organizations, and exported vaccines to more than 60 countries, with a total of more than 1 billion doses. Not long ago, in his speech at the General Debate of the 76th UN General Assembly, Chinese President Xi Jinping proposed that China would strive to provide 2 billion doses of COVID-19 vaccines throughout the year. On the basis of donating 100 million U.S. dollars to the COVID-19 Vaccines Global Access (COVAX), an additional 100 million doses of vaccine will be donated to developing countries free of charge within the year. China will continue to support and participate in global scientific COVID -19 origins tracing, and resolutely oppose any form of political manipulation. China announced that another 3 billion US dollars in international aid will be provided in the next three years to support developing countries’ fight against the epidemic and restore economic and social development. While realizing its own development, China will continue to make positive contributions to world development and progress, and work with other countries to build a community with a shared future for mankind.

2021 will also be an extraordinary year for China-Bahrain relations. In March , Chinese State Councilor and Foreign Minister Wang Yi paid a historic visit to Bahrain and reached a broad consensus with Bahraini leaders on the in-depth development of friendly and cooperative relations between the two countries. On the 100th anniversary of the founding of the Communist Party of China, His Majesty King Hamad bin Isa Al Khalifa and His Royal Highness Prince Salman bin Hamad Al Khalifa, the Crown Prince and Prime Minister sent congratulatory messages to Chinese President Xi Jinping, which effectively strengthened the political mutual trust and friendly relations between the leaders of the two countries. Not long ago, Li Zhanshu, Chairman of the Standing Committee of the National People’s Congress of China, held a video meeting with Fawzia bint Abdulla Zainal, Council of Representatives Speaker of Bahrain. This was the first meeting between the leaders of the legislative bodies of the two countries, which further expanded the friendly exchanges and cooperation between the two sides in various fields. At the same time, China and Bahrain continue to carry forward the fine tradition of helping each other and sharing weal and woe, support each other and in-depth cooperation in fighting the COVID-19 epidemic, and actively overcome the impact of the epidemic, and steadily promote pragmatic cooperation in various fields such as economy and trade, infrastructure, culture, and education, which obtained fruitful results.

China has achieved its first centenary goal, and is striding forward towards the second centenary goal of building a modern socialist country in an all-round way. We are closer, more confident and capable of achieving the great rejuvenation of the Chinese nation than at any time in history. The ‘14th Five-Year Plan’ blueprint has been launched. China will base itself on the new development s t a g e , i m p l e m e n t n e w development concepts, build a new development pattern, achieve a higher level of mutual benefit and win-win results with other countries, and share the dividends of China’s development with the world.