Who will speak out for the forgotten women of conflict? | THE DAILY TRIBUNE | KINGDOM OF BAHRAIN 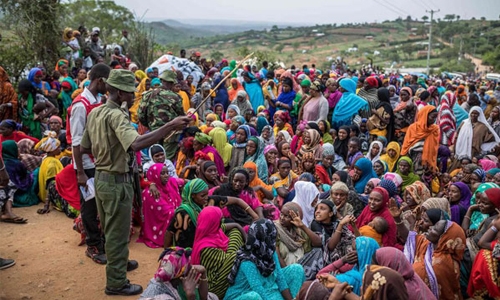 Who will speak out for the forgotten women of conflict?

International Women’s Day rightly celebrates the impressive achievements of courageous women. Yet the world has had less to say about our most vulnerable sisters, as historically elevated levels of displacement due to conflict have left millions of women in hellish conditions in sprawling refugee camps. A common denominator in these camps — from Greece to Lebanon and Yemen — are epidemic levels of rape and sexual violence, exacerbated by the stigma and ostracisation facing the innocent victims of these crimes. Systematic rape in South Sudan or against Rohingya women seeks to humiliate and dehumanise entire populations based on tribal or religious affiliation.

A shocking 2011 statistic estimated that 48 women were raped every hour in the Democratic Republic of Congo, with sexual attacks becoming gruesomely routine in many conflict zones. Thousands of Iraqis languish in miserable camps long after Daesh’s supposed defeat. Wives have seen husbands and sons indefinitely detained, leaving them prone to sexual predation by rampaging paramilitaries. We can’t comprehend the abuse that thousands of Yazidi women endured at the hands of Daesh: Loved ones slaughtered, forced into sexual slavery, daily torture and violation, fearing that each day would be their last.  I was overjoyed at Nadia Murad becoming joint winner of the Nobel Peace Prize.

According to some traditionalist attitudes, a victim of such abuse is no longer an “honourable” part of society. Yet, instead of withdrawing into self-pity, Nadia and others defiantly told their stories, helping make it possible for women to be non-judgmentally embraced back into their communities. These brave girls must feel no shame. They are heroic survivors and witnesses to monstrous acts by sick individuals who themselves bring shame upon mankind.

Around 1,500 foreign women and children remain in Iraqi custody accused of Daesh links: Are they victims or terrorists? Should we forgive them after they express horror at Daesh’s crimes? Should home countries support them in overcoming their traumas? Children aren’t accountable for the sins of their parents but, according to Human Rights Watch, that hasn’t prevented the Iraqi authorities torturing and detaining hundreds of minors on vague and unproven charges. Displaced Syrian women have been hugely vulnerable to exploitation. Criminal networks — including elements from Hezbollah — have been involved in prostitution and people-smuggling networks.

Women have been compelled or tricked with promises of work, finding themselves shackled into the worst forms of slavery. Starving families resort to selling underage daughters into marriages with wealthy men who they never met. Deeply traumatised women socialised to “know their place” often have zero sense of their rights or options. We thus must educate all our girls to know their rights; to know how to assert themselves in the face of male aggression and harassment; and to know they are capable of achieving the highest goals they can imagine for themselves. In the pressure-cooker environment of the refugee camps, levels of domestic violence are appallingly high — 51 per cent of married Gazan women report domestic violence, while 76pc report psychological abuse.

For 70 years, the daily realities of Palestinian women have been arrests, harassment and police brutality. Fearless women like Ahed Tamimi engage in acts of defiance against the horrors of occupation, knowing the brutal and arbitrary responses that Israeli police will mete out. Within some populations, the woefully misnamed phenomenon of “honour killing” is far more prevalent than official reports indicate. Studies in Russia’s Caucasus region demonstrate how the authorities collaborate to thwart such cases on the rare occasions when families take action.

Young girls who buck tradition and shun arranged marriages to pursue their education are frequently sought out for trumped-up accusations, with participation in such brutal travesties sometimes even seen as a route to social advancement. There have been cases of gangrape where the attackers later approached the woman’s family demanding that she be killed to atone for the dishonour she brought upon the perpetrators.

It is a joy to read the inspiring stories of successful women: Female government ministers, leading businesswomen, women who have conquered all in our male- dominated world. However, there must not be silence for the forgotten women whose suffering shames us all. We are shamed by the daily reality of rape and abuse against victims of war, but we are doubly shamed by our inability to honestly speak out.

In several countries, progress has been made in outlawing female genital mutilation, yet the social taboos against discussing this abuse by parents against their own daughters, along with the lack of enlightened education and debate, make it difficult to eliminate this barbaric practice altogether. The UN, the US, Europe and the world have had their opportunities to act on behalf of the female victims of war.

Eight years after the beginning of the Syria uprising, it is safe to say that they have failed. In my experience, inward-looking Western governments are disgracefully set to become less engaged on these challenges.  I, and women like me, live in a blessed cocoon: Blessed by education, loving parents and a thousand opportunities to improve our status.

Yet, how can we celebrate breakthroughs for women’s rights knowing that tonight millions of terrorised women will cry themselves to sleep, traumatised by memories of vicious abuse, and from fear that the noises outside their flimsy shelters emanate from men with predatory intentions?  The #Me Too movement proves how decisive women’s voices can be when we take action against sexual harassment.

It is well past time for us fortunate women to act together on behalf of those women — from Libya to Palestine to Myanmar — whose daily reality is violence and abuse. Let us not brag about women’s empowerment until we have done everything in our power to empower our most vulnerable sisters.

Will Mexico save its vanishing vaquita?