Is that an iPhone in this 350-year-old painting? Well, Tim Cook thinks so | THE DAILY TRIBUNE | KINGDOM OF BAHRAIN 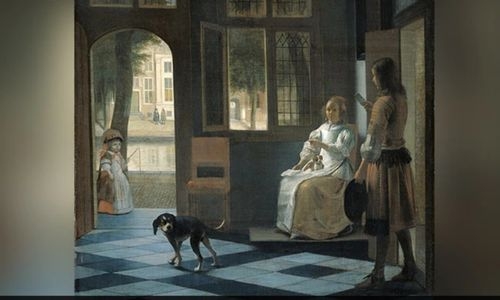 Is that an iPhone in this 350-year-old painting? Well, Tim Cook thinks so

A 350-year-old painting by Dutch painter Pieter de Hooch featuring a quiet domestic scene with an open doorway is hitting the headlines. The internet is convinced that 'time travel' is real after they spotted an iPhone.

The chatter started after Apple CEO Tim Cook in a press conference said that he noticed a device in a piece of artwork during his visit to a museum in Amsterdam in 2016.

The painting is named "Young Woman with a Letter and a Messenger in an Interior," and it was created in 1670. It shows a woman sitting in a chair with a dog in her lap as a man brings her a "letter."

The painting shows a kid standing in the corridor. However, the letter caught everyone's attention after Mr Cook's statement.

Although art enthusiast says that the man who has a rectangular object is "handling the letter" to a woman, many believe that the creation has an easter egg that proves that time travel is real.

According to Metro, the Apple CEO shared his amazement at a press conference a day after his visit to Amsterdam in 2016.

He showed the photo to the audience and said, "It's tough to see but I swear it's there."

Mr Cook's comment on the painting resurfaced when another painting seemingly included an iPhone hit the headlines.

Malala Yousafzai visits Pakistan 10 years after Taliban attack on her