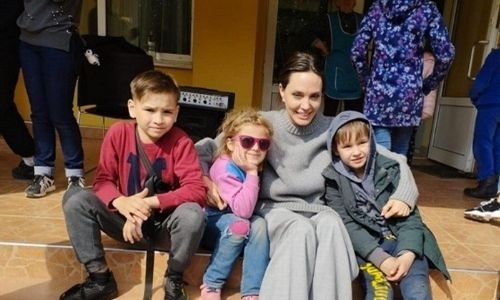 Amid the ongoing fighting in Ukraine, Hollywood star Angelina Jolie, who is on a visit to the country as a special envoy of the United Nations High Commissioner for Refugees (UNHCR), was seen meeting children and visiting a cafe in Lviv.

Jolie, who has spent almost two decades working with the UNHCR met Ukrainian medical volunteers and visited orphans and injured children evacuated from the Donetsk region of the country. “Jolie visited injured children evacuated from Donetsk Oblast and orphans. She also met volunteers who provide medical and psychological help to Ukrainian evacuees,” Kyiv Independent reported in a tweet.

The actress was also filmed by locals inside a cafe in Lviv. She was seen greeting the person filming her and smiling at the people present in the cafe. She also signed a few photographs, CNN reported. Recently, Jolie had expressed concern and support for Ukraine when she visited a hospital in Rome that had welcomed dozens of refugee children.

As part of her work with UNHCR, the actress has visited several conflict zones to help in providing humanitarian assistance. The fighting in Ukraine which has entered its third month now has created an unprecedented humanitarian crisis with more than 5 million Ukrainian fleeing to neighbouring Western countries, according to the UNHCR data.

The fighting has also resulted in almost 3000 civilian casualties as of April 28. The casualty figures include as many as 70 children, according to the UN Office of the High Commissioner for Refugees.