Weary of many disasters? UN says worse to come | THE DAILY TRIBUNE | KINGDOM OF BAHRAIN 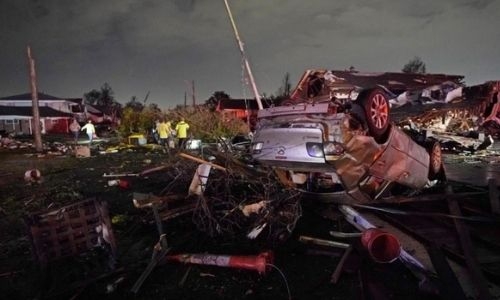 Weary of many disasters? UN says worse to come

A disaster-weary globe will be hit harder in the coming years by even more catastrophes colliding in an interconnected world, a United Nations report says. If current trends continue the world will go from around 400 disasters per year in 2015 to an onslaught of about 560 catastrophes a year by 2030, the scientific report by the United Nations Office for Disaster Risk Reduction said. By comparison from 1970 to 2000, the world suffered just 90 to 100 medium to large scale disasters a year, the report said.

The number of extreme heat waves in 2030 will be three times what it was in 2001 and there will be 30% more droughts, the report predicted. It’s not just natural disasters amplified by climate change, it’s COVID-19, economic meltdowns and food shortages. Climate change has a huge footprint in the number of disasters, report authors said.

People have not grasped how much disasters already cost today, said Mami Mizutori, chief of the UN Office of Disaster Risk Reduction, “If we don’t get ahead of the curve it will reach a point where we cannot manage the consequences of disaster,” she said. “We’re just in this vicious cycle.”

That means society needs to rethink how it finances, handles and talks about the risk of disasters and what it values the most, the report said. About 90% of the spending on disasters currently is emergency relief with only 6% on reconstruction and 4% on prevention, Mizutori said in an interview Monday, AP reports.

Not every hurricane or earthquake has to turn into a disaster, Mizutori said. A lot of damage is avoided with planning and prevention. In 1990, disasters cost the world about $70 billion a year. Now they cost more than $170 billion a year, and that’s after adjusting for inflation, according to report authors. Nor does that include indirect costs we seldom think about that add up, Mizutori said.

That’s because both COVID-19 and climate change disasters have come to places that didn’t used to get them, like tropical cyclones hitting Mozambique, Mizutori said. It’s also the way disasters interact with each other, compounding damage, like wildfires plus heatwaves or a war in Ukraine plus food and fuel shortages, Pulwarty said.

Pulwarty said if society changes the way it thinks about risk and prepares for disasters, then the recent increase in yearly disaster deaths could be temporary, otherwise it’s probably “the new abnormal.”

Disasters are hitting poorer countries harder than richer ones, with recovery costs taking a bigger chunk out of the economy in nations that can’t afford it, co-author Markus Enenkel of the Harvard Humanitarian Initiative said.

“These are the events that can wipe out hard-earned development gains, leading already vulnerable communities or entire regions into a downward spiral,” he said. The sheer onslaught of disasters just add up, like little illnesses attacking and weakening the body’s immune system, Pulwarty said.

“In a world of distrust and misinformation, this is a key to moving forward,” said University of South Carolina Hazards Vulnerability and Resilience Institute Co-Director Susan Cutter, who wasn’t part of the report. “We can move forward to reduce the underlying drivers of risk: Inequality, poverty and most significantly climate change.”

Death toll in migrant boats disaster off Tunisia rises to 20