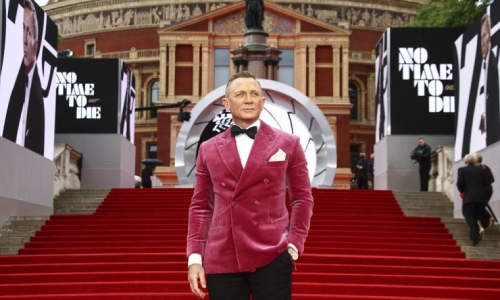 When Daniel Craig first got the gig, he felt like something had gone amiss. “You’ve got the wrong guy,” he told the producers.

But Barbara Broccoli and Michael Wilson insisted. No, he was the one. He was James Bond.

Craig, then a rising performer but far from the expected choice, never had any ambitions to play James Bond. He had assumed he was being strung along as part of a massive casting machine, one of dozens of actors screen tested, AP reports.

“Once I did find out, I was incredibly flattered and deeply confused,” Craig recalled in an interview. “I just felt like I wasn’t the right person.”

Fifteen years and five films later, Craig’s tenure as 007 is coming to a close. “No Time to Die,” which opens in the U.S. on Friday after a 16-month delay due to the pandemic, is the last hurrah in Craig’s celebrated Bond era, a stewardship that saw Craig remake and emotionally deepen the once retrograde superspy — with more than $3 billion in box office along the way. Once derisively labeled “Blond Bond,” Craig turned out to be a smash success.

“It paid off in spades,” said Broccoli. “He’s truly remarkable. He’s reinvented it for the 21st century. He explored the inner-life of Bond.”

But would Craig have ever gone through with it had he known what he was in for?

“If I had known more, I don’t think I would have been able to do it. The less information I had back then, the better,” said Craig, speaking by Zoom from New York. “The rest of it, the weight of it, how huge it all really is — I didn’t know. I didn’t really understand.”

He pauses. “I don’t suppose I really understand it now, either,” Craig added. “I pretend to understand. That’s what getting older is all about. I pretend better than I did back then.”

“No Time to Die,” directed by Cary Joji Fukunaga, is, with certainty, Craig’s final turn in the tux. But it’s also a culmination of where Craig has been driving Bond. His 007 is a character, not an icon, capable of grief and regret, and far from bulletproof. That evolution takes center stage in “No Time to Die.”

“I always just felt: How do these things affect him? Within a Bond world. Not in, like, a Hamlet way. But in a Bond world,” says Craig, who won’t play Hamlet but Macbeth — a play about the perils of ambition — on Broadway next year.

“No Time to Die” started off unsteadily with writer-director Danny Boyle departing over creative differences. Fukunaga stepped in and the script was completely rewritten. That the film was even happening in the first place was, to some, surprising. After the previous entry, 2015’s “Spectre,” Craig had suggested he’d rather slit his wrists than make another. The physical toll of the films and the time commitment — “It’s a year,” he says of each film — was wearing on him.

“I’ve often been criticized as moaning about it,” said Craig, 53. “After ‘Spectre’ I went: I don’t think I can do this anymore. I got to a point where it was like: The risk feels too great. That phone call home where I phone up and say I’m injured, I’m in the hospital — it’s not a nice phone call to make, and it’s happened a lot over the years.”

During filming in Jamaica, Craig slipped while running on a wet dock and badly injured his ankle. The filmmakers could hardly know then that temporarily losing their star would just be one of many headaches to come. Before the pandemic arrived, “No Time to Die” was slated to open in April 2020. Television ads ran. Craig hosted “Saturday Night Live.” The film’s theme, by Billie Eilish, was released, and won a Grammy months before the film’s London premiere.

I hope tensions with Algeria will soon ease: France's Macron