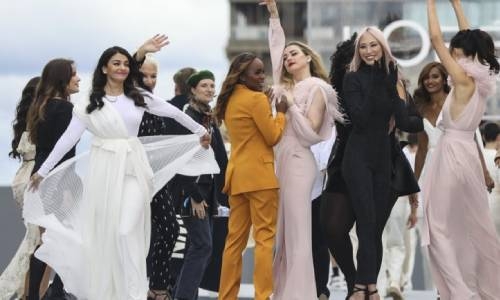 Yet again, Naomi Campbell stole the show at Paris Fashion Week. The 51-year-old runway veteran trod the boards of Lanvin’s flower-themed collection Sunday to screams from guests in a dramatic black cloak.

Meanwhile, on Sunday evening, fashion insiders trekked to Paris’ western edge for Matthew Williams’ Givenchy display that went back to the future.

Here are some highlights of the day’s 2022 spring collections:

Flowers are a natural touchstone for spring. Lanvin was the latest house to use florals this season, designer Bruno Sialelli employing them with aplomb. It gave vibrancy, humor and a contemporary feel to this fresh morning collection, AP reports.

Gently structured garments, which were crisp but moved fluidly, made sure the collection began with a minimalist mood.

Following that came the historic touches that are necessary for the heritage-conscious brand — the world’s oldest continuously running fashion house. Glistening sequined panels on chiffon dresses were drawn from a 1934 dress named ‘Concerto.’

But it was when the vibrant blooms appeared that the real fun came out. The first flower on the runway was in the form of an oversize bracelet then, as a print, blossoming in yellow, across a funky short-suit.

A black and yellow blown-up flower print was ubiquitous — an image executed in blurred focus. It gave the spring musing a harder, urban edge. Florals on an on-trend bikini top provided a stylish burst of color from beneath a vanilla suit jacket.

One pastel gray gown had so many blue flower appliqués that they actually spilled over, cross-pollinating onto the model’s bare chest as stick-on brooches.

It still feels, however, as if there is some way to go before anyone can fill the shoes of longtime Lanvin designer and icon Alber Elbaz, who died last year.

Guests sat around a futuristic, white oval runway to watch the looks, which were filmed live by a menacing black robot on wheels that followed models around.

Anachronism was everywhere in this 70-piece show, which frothed with the frills and flounce of yesteryear.

Skintight black pants morphed into platform sneakers to evoke an 18th century legging, while the chunky footwear sported an arched sole in the spirit of old fashioned clogs.

Yet these historic plays never felt like parody. It was perhaps the minimalist touches or the dominance of black in the designs that ensured the collection felt contemporary at all times.

The setting, the Parvis des Droits de L’Homme (the “Paved Forecourt of Human Rights), was symbolic.

The square was the place where the Universal Declaration of Human Rights was first adopted in 1948.

And this event was the big return by L’Oreal to Paris Fashion Week with a show against street harassment and in support of female empowerment.

As in its previous three seasons, the house executed a glitzy display featuring stars such as actress Helen Mirren and “Game of Thrones” actor Nikolaj Coster Waldau. It was open to the public and broadcast to over 30 countries.

While the cosmetics giant deals with makeup and staging, the fashions are left to the professional designers: Behind the sparkling looks were Balmain, Elie Saab, Mugler and Issey Miyake, as well as a selection of emerging houses such as Koché and Ester Manas.

L’Oreal is on message with equality. But it has not always been. In 2020, transgender model and actress Munroe Bergdorf jumped on L’Oreal’s #BlackoutTuesday posts to accuse the beauty brand of hypocrisy for having fired her three years ago when she complained about racism in strong language. Bergdorf, who was sacked as L’Oreal UK’s first openly transgender model in 2017 for decrying “the racial violence of white people,” later accepted a role as consultant on the U.K. Diversity and Inclusion Advisory Board to help “influence and inform the brand.”

Color, crispness and looseness were the key ingredients for Paul Smith. For spring, the British fashion icon went back to the decade of optimism: The glorious 90s. It made for a vivid show that felt fresh and young — even if bringing back that time as a vintage reference made some fashionistas feel old!

Yet, other garments went artistic — such as a knit sweater and pants that sported geometric yellow squares evoking painter Piet Mondrian.