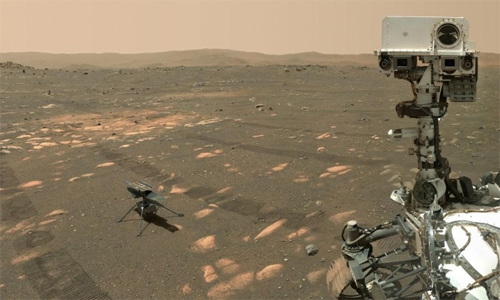 NASA will stand down from commanding its Mars missions until mid-October while Earth and Mars are on opposite sides of the sun, the US space agency said on Tuesday.

NASA said while engineers would stop sending commands, the missions would continue collecting data about Mars during the period, called Mars solar conjunction, which happens every two years.

During the solar conjunction, gas expelled from the sun could interfere with radio signals if engineers tried to communicate with spacecraft on Mars.

That could corrupt commands and result in unexpected behaviour from the deep space explorers, NASA said.

"Though our Mars missions won't be as active these next few weeks, they'll still let us know their state of health," Roy Gladden, manager of the Mars Relay Network at NASA's Jet Propulsion Laboratory said, Deutsche press agency (dpa) reported.
"Each mission has been given some homework to do until they hear from us again."

The Perseverance and Curiosity rovers will take weather and radiation measurements and look for dust devils, while the Ingenuity Mars helicopter would remain stationary at its location.

The stationary InSight lander will continue using its seismometer to detect temblors like the large marsquakes it captured recently.

NASA's three orbiters – Odyssey, Mars Reconnaissance Orbiter, and MAVEN – will continue relaying some data from the agency's surface missions back to Earth, in addition to gathering their own science.

Bahrain's economy grows compared to the same quarter of 2020