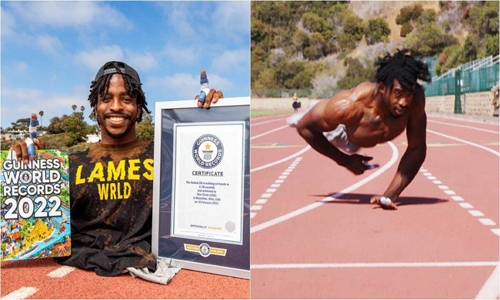 Clark was already an inspiration to many before this, being a motivational speaker, author and entrepreneur. Now, with this amazing feat — a testament to his determination and courage — he has entered the hall of fame.

Born without legs, Clark suffers from caudal regression syndrome, a rare medical condition characterised by the abnormal development of the lower half of the body where the bones of the spine are often missing, according to the US National Library of Medicine. From a young age, his disability never held him back.

In his high school days, he was a wrestler.  Now, returning to the same high school gym in Massillon, Ohio, he achieved the spectacular feat as he “exploded in a burst of speed, smashing the record in a time of 4.78 seconds,” GWR’s official website said. While he attempted to break the record in February 2021, he was officially recognised by the global organisation this week.“

What a great feeling to be a Guinness World Record Holder! Especially considering every school K-12 keeps a copy of this book,” Clark wrote while sharing a video on Instagram in which he talks about the organisation’s special record book. “My goal in life is to inspire kids to be whatever they want to be in life, don’t let anyone tell you what you can’t do!” he added.

“The message I would give to kids with disabilities or anyone with a disability would be – It’s going to be hard, but if you’ve got the heart and the determination, you can go get what’s yours. If you’re disabled or you’re not disabled, the message stays the same,” Clark told GWR.

Clark, who was put up for adoption after he was born, grew up in the foster care system and moved through a lot of homes. It was not until he legally aged out of the system that he was adopted by a loving mother, Kimberli Hawkins.

Bullied and abused as a child, growing up was not easy for Clark. But he continuously pushed himself beyond his limits with a simple motto: “no excuses”.

Thanks to the support of his mother, friends and track coach, Olympic Gold Medalist and Guinness World Records holder Butch Reynolds, Clark said he could do what was previously unthinkable.

Now, with the Guinness record ticked off his list, he is eyeing to compete in the 2024 Olympics. He wants to become the first American athlete to compete in both the Olympics (wrestling) and Paralympics (wheelchair racing) Games.